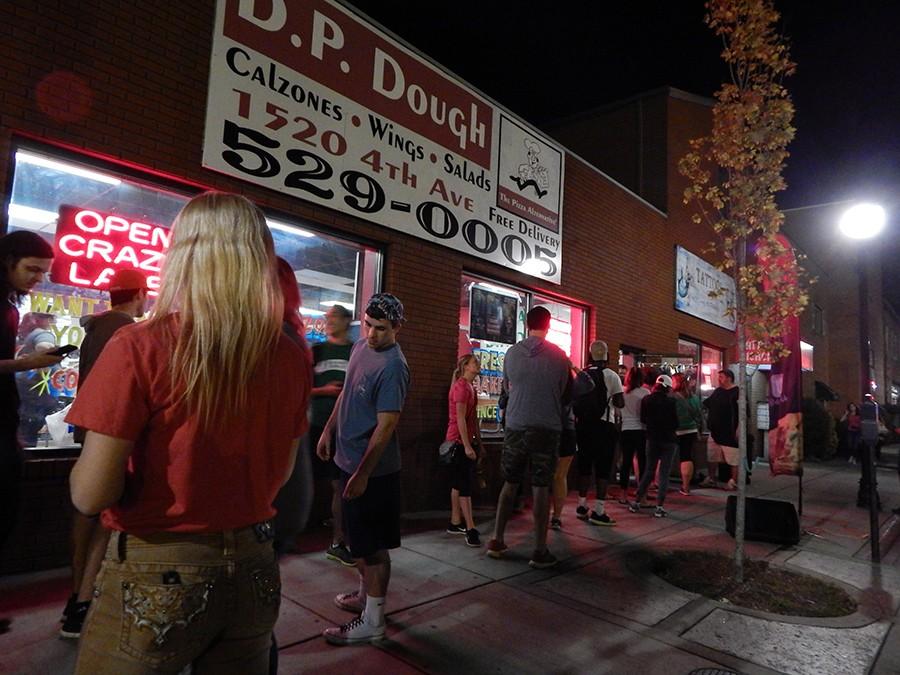 D.P. Dough was able to give back to the community on Tuesday by giving away free calzones starting at 5 p.m. Customers were given a choice of either a Roni Zoni or a Cheese Zone.

Marshall students as well as locals started to line up at the door at 3:30 p.m.

“Before we ever gave out our first zone we probably had 75 people at the door,” store owner, T.J. Johnson said.

“It’s going great right now. We’re only on a 15 minute wait because our employees are working really hard,” Johnson said. Johnson said everything was made fresh, which made the wait time impressive.

The event was scheduled to end at 8 p.m. and Johnson said that every person in line will be fed. “I don’t care if it’s 7:59. We aren’t turning anyone away,” Johnson said.

D.P. Dough also brought in a juggler, a magician and speakers to play music to entertain the customers in line. “Figured hey, we’re already giving away free food. We might as well go all the way,” Johnson said.

However, not all locations are required to host a Free Calzone Day. The stores volunteer. “As for Huntington, it will be done every year,” Johnson said.

According to Johnson, preparation was difficult especially when it came to estimating how many ingredients to order. “We brought in 2 employees at noon, and some will stay until 3 a.m. tonight,” Johnson said.

“More than 2,000 boxes had to be folded,” assistant manager, Alex Adkins said. Adkins has been an employee for over four years.

“This is about the time midterms are starting so it gives students a break,” Adkins said. “We just want to show appreciation to our customers and promote business to students.”

Due to the store’s location, a number of regular customers are students. “I usually eat here at least once or twice a week,” biomechanics major, Elijah Stevens said. Stevens said his favorite menu item is the cheesesteak calzone, but he still waited in line for a Roni Zoni to show his support.

Not all of Tuesday’s customers were students. Retired New Jersey police officer, Frank Cheney, waited in line for a calzone because he was not able to make it last year. “I couldn’t come last year because I was sick. It’s nice a restaurant can do this every once in a while,” Cheney said.

D.P. Dough plans on doing more promotions and is going to start an online ordering campaign which entails giving away free menu items. “The franchise already gives away a free zone a day through social media promotions,” Adkins said.

D.P. Dough employee, Shena Hatten, handed tickets to students as they got in line. According to Hatten the customers were cooperative.

“It brings the community together for sure,” Hatten said. “The customers are what it’s all about.”

Casey Adkins can be contacted at [email protected]