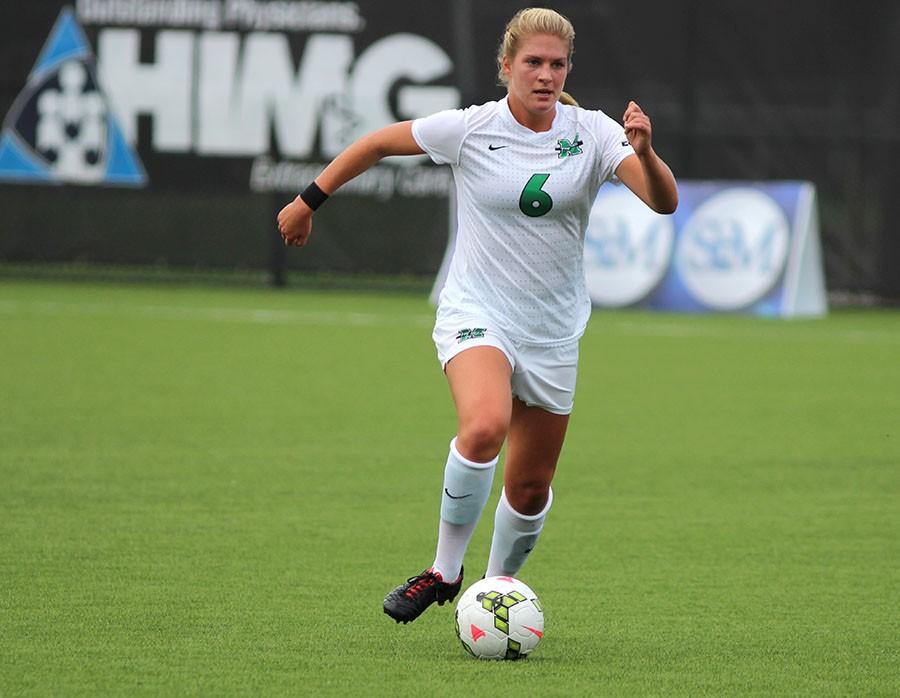 Marshall University women’s soccer team continued in the right direction this weekend as it extended its streak without a loss to 10 matches.

The Herd played the University of North Texas to a scoreless draw Friday and defeated Rice University Sunday by a score of 1-0.

In the match with North Texas, both defenses were stout, diverting multiple scoring opportunities for each team. Each team netted 12 shots, with three being on-goal for Marshall and two for North Texas. Despite North Texas having an 8-3 advantage in corner shots, it also committed five more fouls than the Herd.

Although the game ended in a scoreless tie, it signified a change in the record books. Senior goalkeeper Lizzie Kish recorded her 17th career shutout as a result of her defense. She tied Liz Orton for the most shutouts in program history.

With its 1-0 defeat of Rice Sunday at Hoops Family Field, Marshall moved to 8-1-2 on the season.

The lone goal came on a rebound from freshman Mack Moore off a missed shot from Kelly Culicerto in the 66th minute. The goal was the first of Moore’s career. Despite a similar looking box score from both teams, Marshall played a more disciplined game in terms of fouls as Rice committed 11 to the Herd’s eight.

Another shutout from Kish meant that she passed Orton in the record books for the most shutouts in school history.

“Breaking this record is great,” Kish said. “ I’m just happy that my teammates were able to do their part in helping me get to this point. Now we have to focus on the next game.”

The shutout was Kish’s fourth in a row, and the Herd’s 10th consecutive match without a loss extends the program record.

“The team is clicking and I can’t say enough about players like Lizzie Kish and Mack Moore,” head coach Kevin Long said. “(Moore) never gave up on that missed shot and she does whatever is needed for us to pick up the win.”

The Herd will go on the road in its next match when it faces the University of Texas at San Antonio Roadrunners Oct. 2 at 8 p.m.

Josh Hughes can be contacted at [email protected]