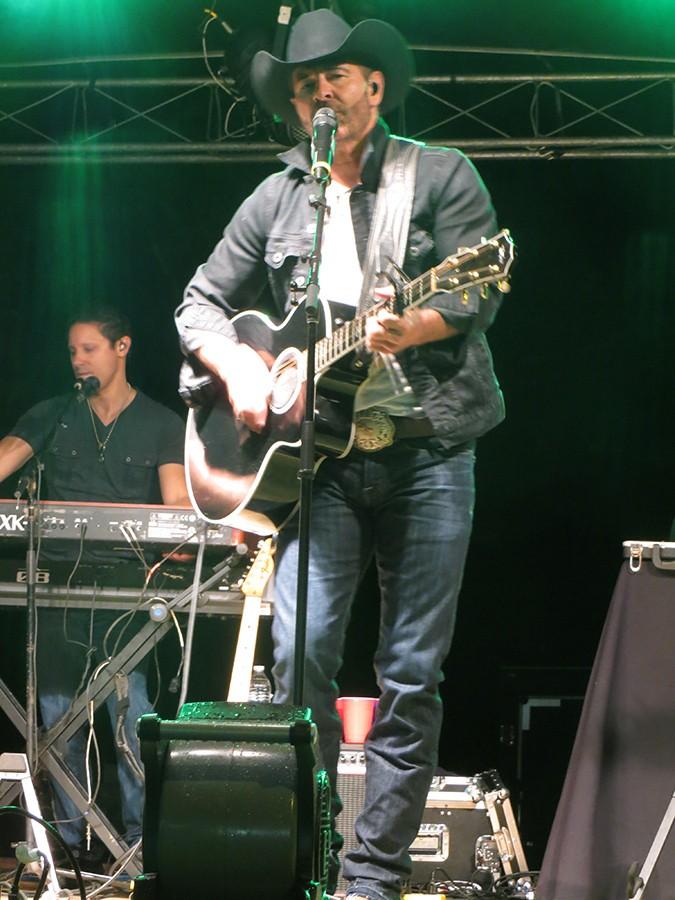 Many umbrella wielding fans waited in their seats as a quick rain shower delayed the start of Trick Pony’s set.

Saturday was not the first time Trick Pony had performed in the Tri-State area.

“This is where you find your real middle America,” Newfield said. “The people we come across in small towns are salt-of-the-earth-type people.”

The group originally formed in the 1990s, but finally made their debut at the top of the country charts in 2001, with one of their most popular hits.

“‘Pour Me,’ is just one of those songs,” Newfield said. “There’s an energy to that song that is just really fun. It’s immediately recognizable.”

After a few albums and several chart topping hits, the band members decided to go their separate ways in 2006. Newfield had success as a solo artist with her power-ballad hit “Johnny and June.”

“’Johnny and June’ is one of my favorites to perform live.” Newfield said. “It just erupts into this beautiful chorus.”

After several years of working on their own music, Newfield reunited with former band member Keith Burns and once again became Trick Pony.

“We’re keeping our minds open musically,” Newfield said. “We’ve evolved a lot since 2001, since we came out with ‘Pour Me.’”

As the rain came down, Heidi, Keith and the rest of the ponies led the crowd in singing their remake of the 1978 Bonnie Tyler hit “It’s a Heartache.” Fans got into the tune as the lyrics rang out “standing in the cold rain, feeling like a clown.”

The band has had its share of heartache in the past year. Trick Pony tour manager Mark O’Connell suffered a heart aneurysm in April.

“We all know, no matter who we are, what your age, we are all being touched by something,” Newfield said.

As song writers do in troubled times, Burns and Newfield wrote a song titled “It’s a God Thing.”

“Every single night that I sing it, no matter where we are the hair on the back of my neck rises,” Newfield said. “It’s so personal to Keith and I.”

The single is currently on iTunes and all of the proceeds go to O’Connell’s medical bills.

The rain subsided for Trick Pony to perform a few of their hits as well as some of the new songs they have been working on.

“We find that playing new music in front of a new audience, if they are captivated, it really doesn’t matter how big or small the venue, there’s this wonderful, visceral exchange of energy between the audience,” Newfield said.

As Trick Pony started to play “Pour Me,” the skies opened up and the rain poured down, sending the audience to seek shelter. The remainder of the concert had to be cancelled for safety reasons.

“There are some things you simply can’t control,” Newfield said.

Trick Pony has had to overcome many obstacles since the band’s formation in 1996. Both Newfield and Burns have been working on their own material as well as songs for Trick Pony.

“I’ve been interested in writing something totally out of the box,” Newfield said. “I think we’re digging a little bit deeper.”

The band is continuing to tour small festivals throughout the country while working on new music.

“Everybody’s heart is in this Trick Pony thing,” Newfield said. “We are bringing our music into today.”