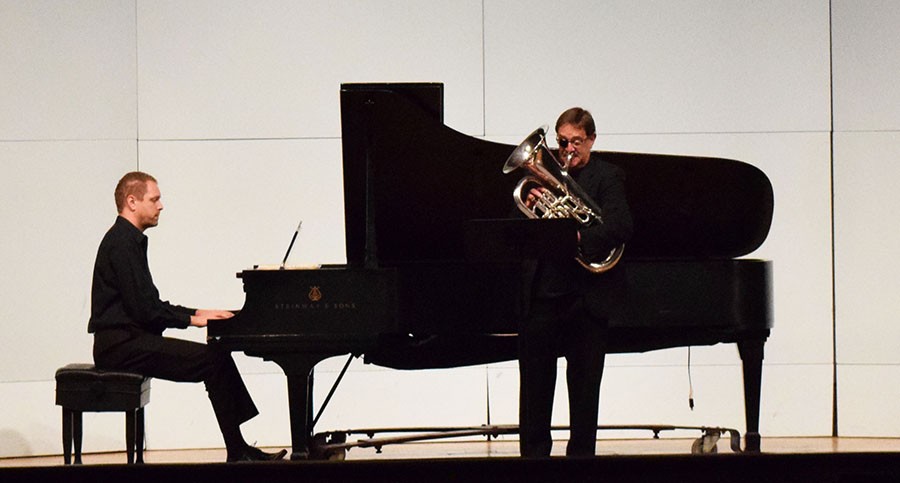 On Sunday, the Smith Recital Hall was filled with attendees for the musical performance of Marshall University’s own Michael Stroeher and Johan Botes.

Stroeher played euphonium and was accompanied by Botes on the piano. Stroeher and Botes captured the audience by playing three pieces.

The first piece was “Arpeggione Sonata”, a nineteenth century piece. David Werden, a retired euphonium soloist from the United States Coast Guard Band, arranged version of the song for the euphonium.

The second piece, which ended the first half of the show, was called “Concertino”. This piece is originally by Rolfe Wilhelm of Munich. In 2012, Wilhelm received a lifetime achievement award for his contributions to the euphonium.

“I thought the show was really great. I came here with my daughter who is a freshman,” said Robin Withrow, audience member.

Stroeher said that he thought the performance went well especially since this was his first public performance playing euphonium.

“You always feel like you could do better, but it was good I think,” said Michael Stroeher, professor of Low Brass and Coordinator of Graduate Studies.

Botes said he felt that the performance was good and that there was a good crowd. He said that there were a few problems here and there, but overall, Botes thought it went well.

“There’s a different energy when you perform live because you know that people hear it once and it’s done,” said Johan Botes, professor of Classic Piano, Piano and Collaborative Piano.

“I’ve been lucky that I’ve been able to do everything I wanted,” Stroeher said.

Botes role throughout the recital was piano collaborator, meaning his job was to accompany the instrumentalist.

“When an instrumentalist wants some accompaniment, they usually choose the piano,” Botes said.