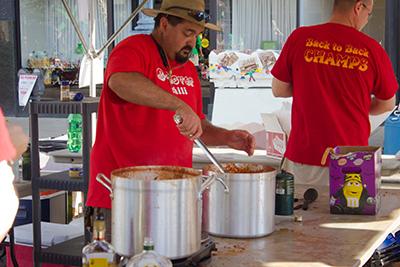 The rain had very little affect on the attendance of not only locals, but also people from all over the East Coast.

The annual event featured a hot pepper eating and a beer drinking contest, as well as a “Shoot n’ Holler” contest where contestants take a shot of tequila and then yell at the top of their lungs.

Chili cook-off contestant Joe Napier said he loved to see all of the people that come out to ChiliFest.

Napier and his cook-off teammates used to play hockey together, but are now focusing on food. Together, they’re known as the competitive team “Apocalypse Chili”.

Napier said he’s not completely confident about his chili overall, but that he is confident that it’s hot.

Music was played on the Pullman Square Stage all through the festival.

“I really liked the music. The music has really made the event,” Block said.

Block, an avid vegetarian, said she likes to come to ChiliFest to get her husband out of the house even though she doesn’t eat the chili herself.

In the end it was Pennsboro, West Virginia native, Matt Bush who took home the trophy and $1,500 for the best International Chili Society Red Chili.

The ICS’ West Virginia State Chili Championship brings cooking teams from all over the East Coast to Huntington every year since its beginning at Ritter Park in 1983.

Kabz James can be contacted at [email protected]