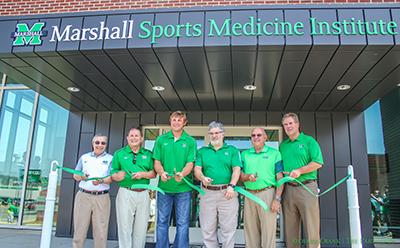 The final part of the Chris Cline Athletic Complex, the Marshall Sports Institute, had its opening on Sunday. Sept. 6. The event led into Marshall University Thundering Herd-Purdue Boilermakers football game.

The Institute cost 35 million dollars and is included as a part of the Marshall University Athletics Vision Campaign.

“This facility is simply as someone said ‘the region’s game changer’.” Mike Hamrick, Marshall University Director of Athletics said. “This was a dream of many and it’s come true today.”

“It’s a great facility. Bar none one of the top facilities within the country,” former Herd quarterback, Chad Pennington said. “It helps us complete the circle for the student athlete where now each young man and young woman can feel confident that they can feel successful on and off the field.”

The Institute features an indoor practice facility for the athletic component of the plan, as well as classrooms in the facility to help athletes and others involved with the program.

In addition, the Institute features an x-ray room and a physical therapy area with weight equipment.

Some of the weight equipment in the institute can be also seen in Marshall’s Rec Center. “The difference is specialists that work in the facility. All of this equipment is pretty standard in a lot of gyms,” said Shawn Bastin, the Executive Director of Rehabilitation. “We have professionals that are specializing in sports medicine whether that it’s physical therapists or athletic trainers. We utilize this as a tool to help train or help heal an athlete.”