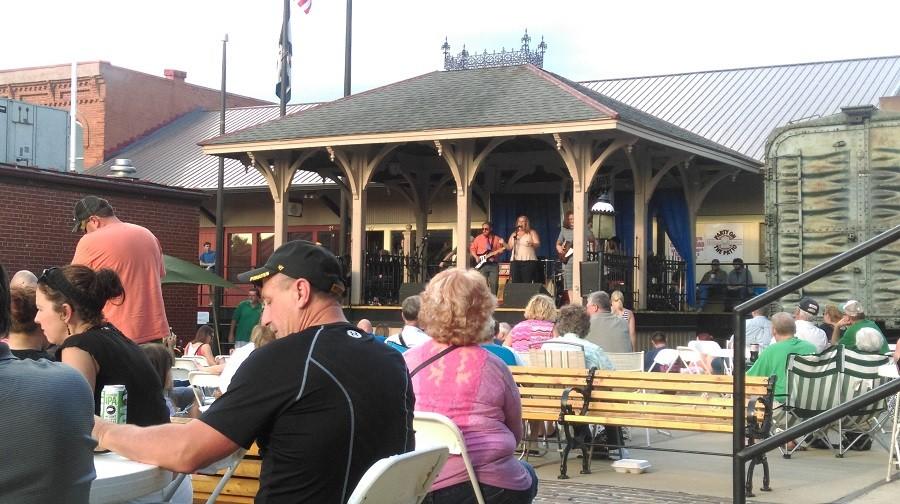 The end of summer brought the blues to Huntington. The sixth annual Diamond Teeth Mary Blues and Arts Festival held this past weekend welcomed people from across the region to support local artists and enjoy the sunshine and festivities at the Heritage Station.

“I came to the festival today with my wife Janie and my friends Joe and Keyamo. This is the first time I’ve ever been, but it has been very enjoyable, and I will be back,” said Harvey Kinniard, a visitor at the festival.

Kinniard said the festival along with all of the live music in the city, county and state is a way for people to get together and listen to the talented musicians from around the area.

Party On The Patio kicked off the weekend Friday night with an evening concert setting the tone for the blues festival that lasted from noon to 11 p.m. Saturday.

The festival celebrates Diamond Teeth Mary McClain who was born in Huntington in the early 1900’s and was an American blues and gospel singer. After McClain died, her ashes were spread on the railroad tracks near Heritage Station.

“We did it to commemorate her, and we try to keep the theme since we are celebrating a local person. A high percentage of our acts are local blues acts,” said Chris Sutton, a member of C&S Railroad blues band.

The show on Saturday began with the father-son-duo Tom and Brenden Wintz who are local musicians from Barboursville. The Wintz duo captivated the audience and had everyone on their feet. They even played an extra song upon request at the end of their performance.

“There are a lot of great local musicians. We do a lot of original stuff, and if we get a good response from the audience, then it feels pretty good,” said Tom Wintz.

Tom Wintz said he enjoys performing with his son, and they write their songs together.

“He’ll come up with a chord progression and get a layout of a song, and I usually come up with the words,” said Tom Wintz.

Tom Wintz said he and his son are thrill seekers and play because music is their way of life.

Sutton said the festival draws a good crowd every year, and they see a mixture of the same and new faces.

“I try to have as many varied acts as I can that are still considered blues acts, so that every act is different, and people get to see the wide spectrum of American blues,” Sutton said.

The festival is free to the public, and Sutton encourages everyone to come back next year.

Kalyn Bordman can be contacted at [email protected]