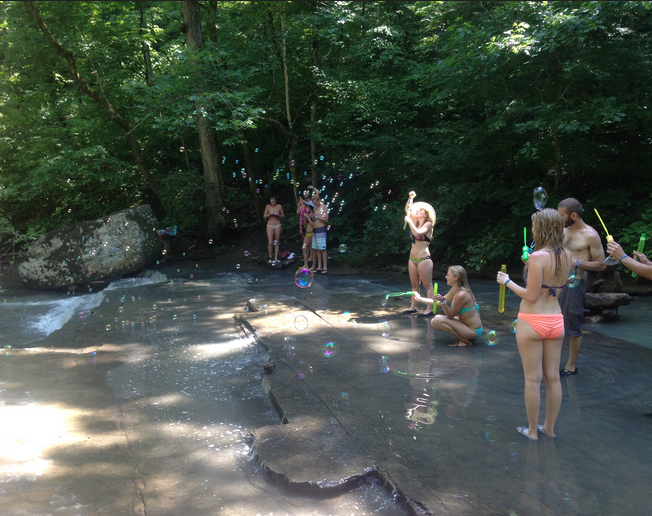 Festival goers stop and blow bubbles between performances at Wakarusa.

Deep in the Ozark Mountains of Arkansas, Wakarusa brings an experience unlike any other festival. The lineup is full of funky, eclectic hodge-podge collectives, backwoodsy modern folk, and plenty of EDM. But what makes the festival is the unique crowd of humans that gather to make it happen, and I met some of the best ones while volunteering.

Upon arrival at the top of Mulberry Mountain just before midnight, I had friends within two minutes of parking my car. Volunteer camping was tent-only, meaning vehicles were parked in a lot separate from the camping area. The wagon I brought with me proved to be one of the most useful things in my arsenal of festival supplies, and it seemed that I was the only one who thought to bring one. I lent it to a group from Houma, Louisiana, and they became my camping buddies. Many shenanigans were had while setting up camp in the late night.

The first artist of my festival season was the Ben Miller Band playing on the Backwoods stage, a small venue with plenty of trees for shade and hammock space. The trio includes a guitar, an electric washboard, and a bass made out of a broom handle and a wash bucket. I was duly impressed by the use of a pedal on the washboard. These guys truly have a sound that is all their own.

Next on my lineup was Moon Taxi, playing on the main stage. I fell in love instantly. The prog-rock band’s groovy energy livened up the hot and hazy Ozark afternoon with plenty of guitar shredding and hair whips.

I stuck around for a little bit of The Devil Makes Three after a suggestion from a friend, a very lively modern bluegrass trio that gave me just enough energy to start my first volunteer shift, and a felt a little less homesick after soaking up some of my people’s music.

Honestly, I was dreading volunteering, especially when I had checked in earlier that day to see what job I was assigned, only to discover that “floater” meant I was going to be placed wherever the festival needed me at the time. When I was assigned to staff catering, I groaned internally and had brief flashbacks of working fast food, but it was the best volunteer shift I could have asked for. Making gallons and gallons of coffee, cutting potatoes, cracking 35 dozen eggs into a bucket, and making 100 lbs of ziti while listening to Slightly Stoopid and Umphrey’s McGee play on the main stage isn’t such a bad exchange for a free festival ticket.

The best part about Friday was not having a volunteer shift to worry about.

Sleeping in until after 10:30 a.m. is nearly unheard of in festival land, but I had set up my camp in a way that perfectly shaded my tent from the relentless sun for an extra couple of hours. I also may have woken up due to the heat and crawled halfway out of my tent to return to sleep. Staying up until 5 a.m. probably had something to do with it.

Ever since I arrived I kept hearing everyone go on about going to see the waterfall, and I set out to go find it. As it turns out, the waterfall was at the bottom of a trail that takes 20 minutes to hike down the mountain, and is at some points a grade comparable to that of a high-level ski slope, but it was all very worth it. The cool Ozark stream was incredibly refreshing in the middle of the 90-degree afternoon. It was very easy to get stuck at the bottom of the mountain for a while because of the impending hike back up. I motivated myself with the promise of delicious pizza at the top of the mountain.

While waiting for Rising Appalachia, one of my most anticipated acts of the festival, I discovered Mountain Sprout, a rowdy take on bluegrass with less-than-G-rated lyrics, comparable to Old Crow Medicine show but more raw and more obscene.

I was absolutely floored by Rising Appalachia’s performance. When the Smith sisters perform, it is like being graced with the presence of goddesses. Their worldly and eclectic sound takes the traditional sounds of Appalachia and infuses them with urban influences and activist agendas.

After being taken on that spiritual journey, I sprinted to see Chance the Rapper. This kid floored me. I had no idea what to expect, as this was one of the first hip-hop shows I had ever experienced. Chance’s energy was absolutely inspiring and I damn nearly cried because I could feel how enthralled he was to be performing. Chance and the Social Experiment create an experience unlike any other hip-hop show, like rap for people who like jam bands (as someone described to me previously).

It must have been the hike, but that night I slept through multiple very loud performances happening on the Outpost Stage that faced the volunteer camp.

I wasn’t too upset about missing STS9 and Big Gigantic because the next morning was my second volunteer shift, where I was assigned to pick up garbage beginning at 9:00 a.m., a task I was very familiar with because of my experience with Clean Vibes. I even ground scored a packet of glitter out of it.

I found new friends back at Volunteer camp while listening to Rising Appalachia and Reptar play in the distance, and they convinced me to follow them to see Nahko and Medicine for the People. They were so stoked about Nahko that I had to see what all the fuss was about.

I’m riding the Nahko hype train now. As I listened to the songs, I couldn’t help but be reminded of the messages of Andrew Jackson Jihad, except more positive and upbeat. The sound is in a similar folky vein as AJJ but leans more toward hippy-jam than punk. Nahko is hands down one of my favorite discoveries of the summer so far.

The rest of the evening was a whirlwind of lights and dancing. I found the funky California garage band The Growlers, freaked out to The Roots’ cover of “Trap Queen,” and experienced a Glass Animals crowd that over-packed the area for the stage. The group watched Ben Harper to prepare for Major Lazer. I’m not exactly a huge Diplo fan, nor am I really a fan of anything Major Lazer does musically, but they put on one heck of a rage-fest. We tried hitting up the Satellite Stage for more EDM-fueled adventures until the wee hours of the morning, but after a couple of songs from The White Panda, we were too tired to stand and retired.

Waking up on Sunday was the most difficult, especially upon discovering how stiff my legs were from dancing for six hours.

My last volunteer shift was from 3:00 to 8:00 in the VIP catering kitchen. I was thrilled because of how awesome my staff kitchen shift was, but I was soon to be disappointed. The people in charge of VIP catering were significantly less awesome than those in the other kitchen, and I spent most of the shift either very confused or very frustrated about what I was supposed to do, or worrying about doing it wrong.

Thievery Corporation closed out the festival with some funky jams and a couch-sitting sitar player. The acid jazz, world, reggae fusion sound of the collective was the perfect way to wrap up Wakarusa in the eclectic spirit of the festival in a fit of dance.