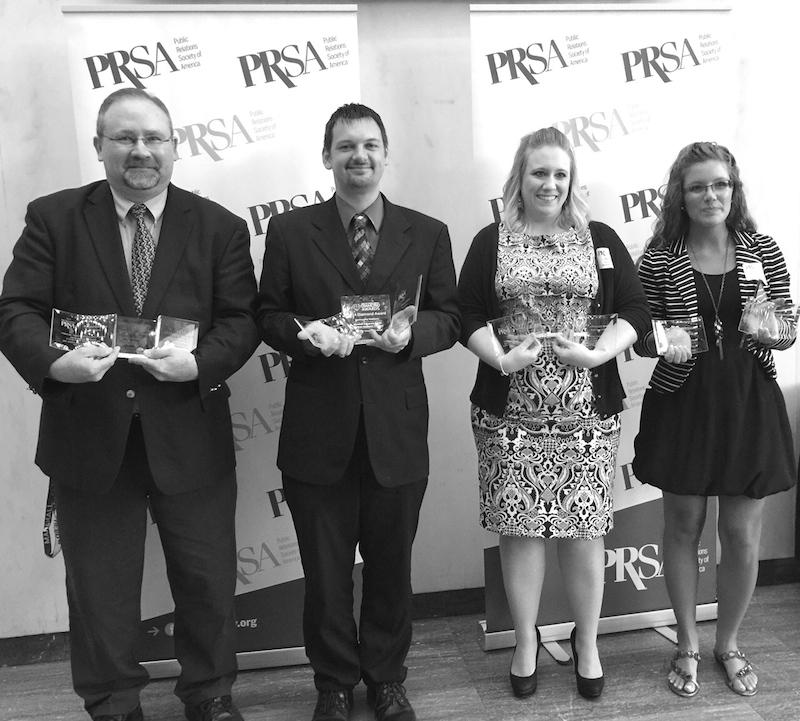 Students from the 2013 Shaver Media Group, were awarded the first-place 2014 Diamond Award for their work in the “Questions” Trivia event as part of the River Valley Child Development Services campaign. The award recognizes the top public relations campaign in the region, according to associate professor of public relations Dr. Terry Hapney, Jr. Marshall’s region, the East Central District, includes Ohio, Kentucky, Indiana, Pennsylvania and Michigan.

Ashley Peach, a 2013 public relations graduate and member of Shaver Media Group, said the trivia night was the culmination of months of work that spanned two classes.

“The prep-work for the campaign started in August as part of a two-class project,” Peach said. “We started preparing for the main event, Questions Trivia Night, in August as well, because we needed to raise money to pay for the room, food and things like that.”

To get the awards, the students’ work was judged with the same criteria as that of professional firms and organizations. Hapney said the awards are not given unless the work reaches a certain standard.

“There were only three organizations in West Virginia to attain the prestigious Diamond Award honors,” Hapney said in a news release. “The other two were professional organizations at the regional and state levels, including a state agency. The fact that my students attained such a level of excellence speaks volumes to the quality of their work as public relations practitioners.”

A 2014 class was also rewarded for its work in the “Herd for Hoops” campaign, benefitting the Hoops Family Children’s Hospital with a first-place Crystal Award for social media use.

Amber Payne, a member of the 2014 class, said the awards are an additional achievement to an already successful campaign.

“Creating a campaign from scratch and attaining the goal we set was amazing,” Payne said in the release.

For Shaver Media Group, in addition to the Diamond Award, it also won two first-place Crystal Awards for a news release and brochure.

Peach said she knew her campaign team was in the running for awards, but didn’t expect to win as many as they did when she saw the other nominees. The awards they did walk away with, Peach says, were a testament to the hard work of her classmates.

“I think it shows how hard we really did work that semester,” Peach said. “For many of the students, this was their last semester of undergrad with other difficult, capstone course-loads. We felt as if we worked hard and had a very successful campaign, but to be honored with Diamond Awards is just the cherry on top.”

The two classes also received six honorable mentions for things such as campaign logos and invitations. The Marshall chapter of Public Relations Student Society of America received an honorable mention for its meetings flier.

The students accepted the awards at the PRSA-West Virginia Crystal Awards gala June 17 at the West Virginia State Capitol in Charleston.

Shannon Stowers can be contacted at [email protected]marshall.edu.