Walk with Mayor series kicks off in Westmoreland 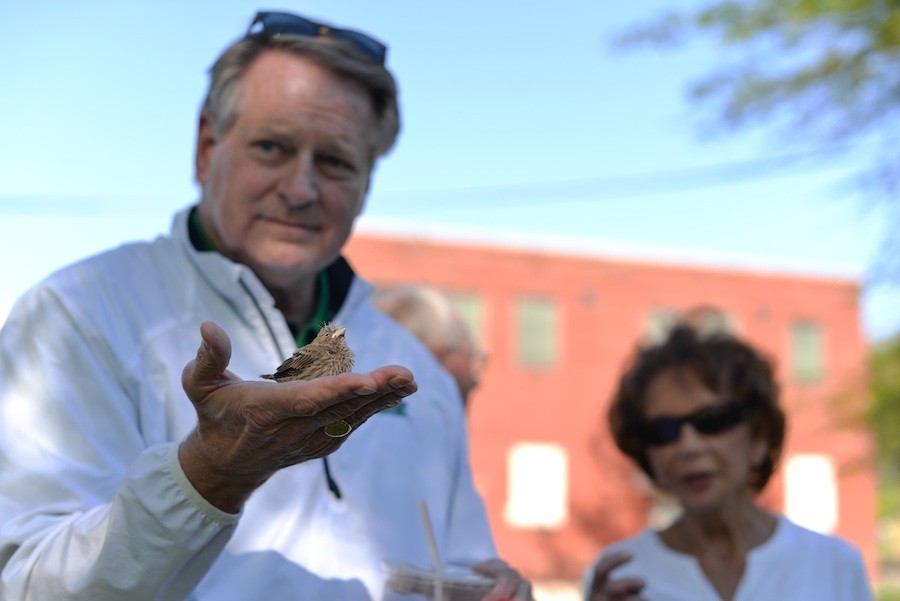 Huntington Mayor Steve Williams rescues a baby bird from the street during the inaugural installment of the Walk with the Mayor series Tuesday in the Westmoreland Neighborhood.

Huntington Mayor Steve Williams took to the streets Tuesday for the first installment of the Walk with the Mayor series to address residential concerns and engage in exercise with members of the Huntington community.

Williams and a dozen others explored the sidewalks and documented the areas that were in need of updates or total renovations.

Carole Boster, president of the Westmoreland Neighborhood Association, assisted in giving the group a tour of her district.

“[The mayor is] asking us to alert him on any issues we have down here that the city could help with,” Boster said. “[We expect] to continue the relationship we have with the city and have the mayor see firsthand some of the things we’re talking about.”

Deacon Stone, project director of the Coalfield Development Corporation, said renovations, specifically to the Corbin Building beside the Westmoreland Park, are a stepping-stone on the path toward the district’s overall improvement.

“These standing dilapidated structures, particularly in the brownfield areas, represent real opportunities for us to make a huge difference and create on-the-job training, business and incubation opportunities and so on,” Stone said.

Williams said the series enabled him to see the community’s concerns firsthand.

“It’s been fun and enlightening, and what’s most important is that we’re out together,” Williams said. “Folks here have talked to me about some of these issues, but I haven’t been able to see them. And this is better than a meeting in an office any day of the week.”

Several Westmoreland residents joined in on the conversation as the group strolled past their homes.

“When you start hearing from folks on a spur-of-the-moment, they have very direct concerns,” Williams said. “The whole purpose of this is two-fold: one, naturally, is to try and get whatever information we can, and secondly just to get out and walk.”

Williams said a major advantage of the program is the ability to encourage residents to get out and about.

Councilwoman Joyce Clark said the series was an opportunity to promote goodwill between city government and the community.

Clark said the mayor’s new approach to involvement will be less intimidating for residents.

“With [the mayor] going to every district in the city, it’s going to be really good for the citizens who don’t know how to approach the mayor or come to City Hall,” Clark said. “If they see him out and about, then they’re more likely to start a conversation.

The Walk with the Mayor series will visit the second district from 5:30-7 p.m. Tuesday at the 14th Street West gazebo.