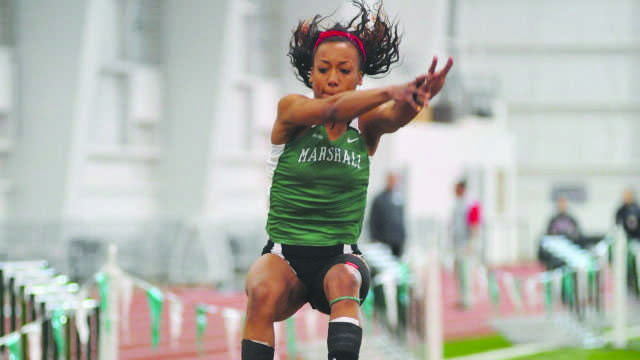 They estimate 22,000 participants from around 60 countries will participate.

Assistant coach Don Yentes said among the competition he thinks the Herd is ready to run.

“It’s just a great atmosphere,”  Yentes said. “Sometimes it’s a difficult place to run fast because of how much standing around you have to do after you warm up, but it is a great opportunity for our girls to do some good things.”

Junior Asia Bange is competing at the Penn Relays for the first time, and despite the size of the meet she  said she is not intimidated.

“I’m not one that’s frightened by people or by who’s watching,” Bange said. “I just get out there and compete.”

Bange said she hopes to run a personal best this weekend.

“I haven’t been able to run my personal best since last year, so I’m just really excited about that, just to be going to Penn with all of the competition,” Bange said.

Last year at the Penn Relays the Herd’s senior Jasia Richardson led the team by placing third in the triple jump.

The team is headed to Penn after competing in the James Madison University Invitational and the Virginia Challenge last weekend.

Sophomore sprinter Isatu Fofanah broke two school records at the Virginia Challenge. Fofanah ran the 100-meter sprint in 11.57 seconds topping her own record and ran the 200-meter in 23.80 seconds, a record previously held by Vanessa Jules who finished in the top-six of the NCAA nationals in 2013.

Coach Yentes said as long as Fofanah continues to work hard she will improve in future meets.

Junior sprinter Shyra Molton said she did not perform well last weekend at the JMU Invitational, placing fifth in the 400-meter dash with a time of 58.58 seconds.

Molton said she is not sure if she will be competing at Penn due to a recent injury.

The Herd has one more regular season meet after the Penn Relays and then the team is off to the Conference USA Championships in El Paso, Texas.

“I think that a lot of the girls have had a great season,” Molton said. “We’ve improved so much since the new indoor facility.”

The Herd begins the three-day competition is at Franklin Field at the University of Pennsylvania in Philadelphia.