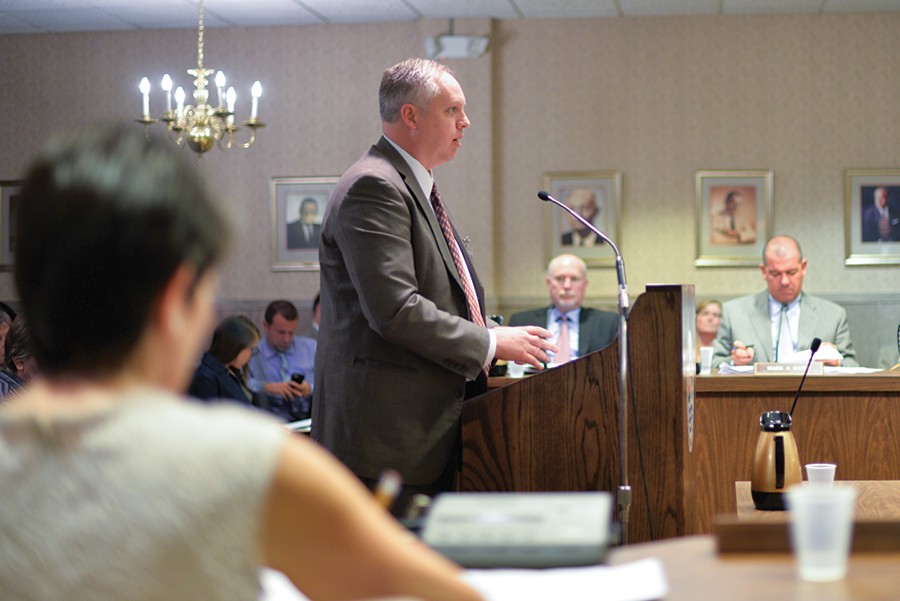 Deron Runyon, finance director of the City of Huntington, announces the budget revisions made to the fiscal year 2015-2016 Monday at City Hall.

Huntington City Council passed a resolution authorizing an equipment purchase for the Huntington Police Department and approved the 2015-2016 fiscal year’s budget revisions Monday during its biweekly meeting at City Hall.

HPD will purchase a Morphtrak fingerprint and palm print scanner to transmit data faster than the traditional mailing method.

“The system that we’re seeking is compatible with our five existing portable fingerprint scanner units,”  Huntington Police Chief Joe Ciccarelli said. “It’s also compatible with the state’s system. It will allow us, for the first time, to electronically transmit fingerprints to the FBI.”

Ciccarelli said one scanner will be maintained for juveniles.

“In short, $500,000 from contingency to put money in the paving budget for the paving we’re doing right now, it’s putting money toward that,” Williams said. “$150,000 is moved to motor pool, and then there was money moved out of the landfill closure account to the deficit in the Sanitation Department.”

Deron Runyon, finance director of the City of Huntington, said the revisions will leave $900,000 open in the general fund.

The mayor also announced plans for the annual Earth Day celebration from noon to 6 p.m. April 22. Activities will include tree planting, a stroll on the Paul Ambrose Trail to Health (PATH) and rain barrel demonstrations.

The council recognized Cabell County’s award of the Community Assessment and Education to Promote Behavioral Health Planning and Evaluation (CAPE II) innovative grant. Cabell County was one of four areas selected nationally to receive the grant.

Lynn Ormiston, program coordinator of the Cabell County Substance Abuse Prevention Partnership, said she is eager to see what the grant will do for the community.

“We see this as a win-win for everybody for all of us as partners,” Ormiston said, “but also for our community as a whole.”