The Herd visit the Greenbrier for an intra-squad scrimmage 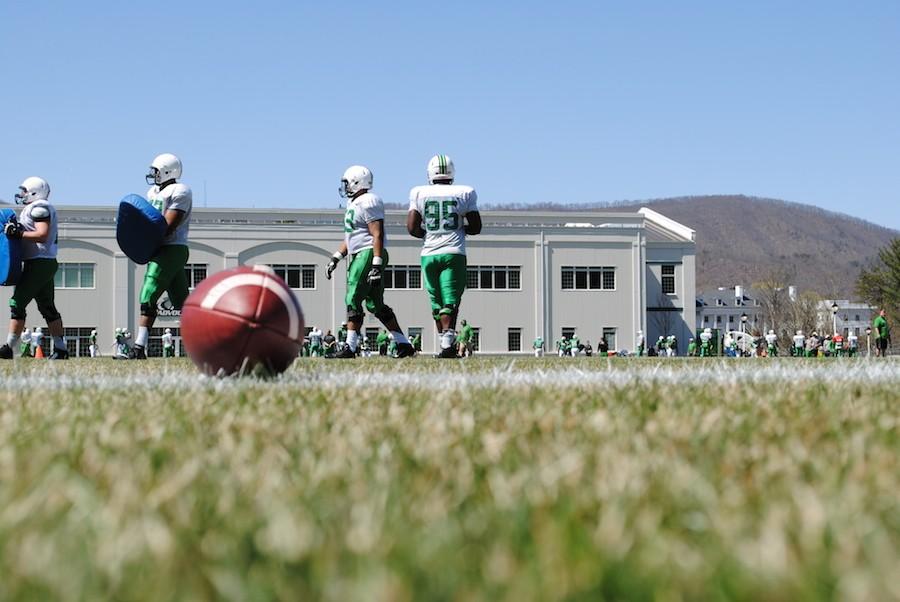 The Herd begins its first spring scrimmage at the Greenbrier Saturday.

Marshall University’s football team and head coach Doc Holliday took the field Saturday at the Greenbrier for the Thundering Herd’s first scrimmage of 2015.

The Greenbrier is home to the New Orleans Saints practice facility, which includes three practice fields and a facility with meeting rooms, locker rooms, weight rooms, a dining area and physical therapy facilities.

Right tackle Clint Van Horn is originally from the Beckley area, about an hour from the Greenbrier.

Holliday said owner of the Greenbrier and Marshall alumnus Jim Justice did a nice job with the facility.

“Every one of our players has a dream of someday playing and working out at a facility like this,” Holliday said. “It’s tremendous, it’s great for our kids to get exposure to something like this, it’s just been a great day for us.”

Fans and family from West Virginia and beyond joined the team for the scrimmage.

As for the battle for quarterback goes, Holliday said the three who played in the scrimmage performed well, junior Michael Birdsong, junior Gunnar Holcombe and freshman Chase Litton.

“I thought all of them made some good decisions, took care of the ball for the most part,” Holliday said.

Holliday said the coaches will start to make decisions concerning player positions when the team heads back to Huntington to evaluate film from the scrimmage.

“Overall, I thought they played hard, I thought they were physical, it’s an important thing, and the rest of the things we can fix,” Holliday said. “If you’re physical and tough you’ve got a chance, and I think our team is that.”

Spring practice for the Herd continues this week from 3:30 p.m. until 5:45 p.m. Tuesday and Thursday at the Joan C. Edwards Stadium.

The Herd has another scrimmage scheduled for 9:45 a.m. Saturday at the Joan C. Edwards Stadium.