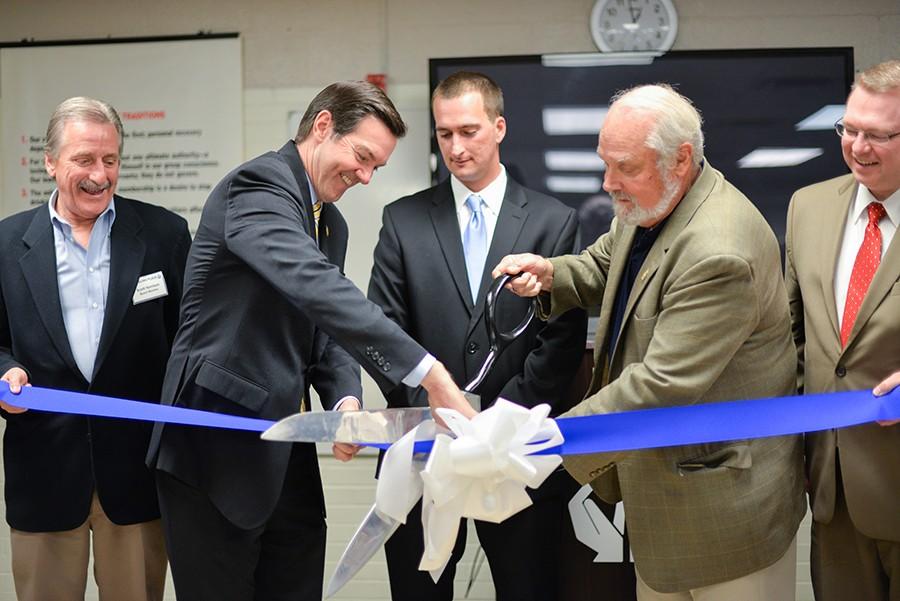 Rep. Evan Jenkins assists in cutting the ribbon during a ceremony to celebrate The Healing Place's 30-bed expansion Thursday in Huntington. The facility plans to expand to 100 beds later this year.

The Healing Place in Huntington celebrated its 30-bed expansion Thursday, and it will become a 100-bed facility in a few months.
The Healing Place is a long-term, residential, peer-driven recovery facility helping change the lives of those who enter.
Founded in 2011, the Healing Place is for men who are battling substance and alcohol addictions. Since its doors opened, the Healing Place had 120 graduates with a 65 percent success rate.
Matt Boggs, director of development, said he never imagined the Healing Place to expand this much.
“Our community has really bought into the idea that recovery is possible and we can’t incarcerate our way out of this problem,” Boggs said.
Boggs, who is a graduate of the Healing Place, said he believed it was his moral obligation to help other people battling addiction.
“When I went through the program in March 2012, there were 32 men here, and I was one of the 32,” Boggs said. “Seeing that the place was still demolished and that stuff wasn’t done, it was out of reach, we thought, ‘We’ll never get 100-beds.’ It’s been an amazing experience.”
In addition to the beds, the Healing Place also acquired a new name for the facility: Recovery Point Huntington.
Debby Hibbard, Healing Place board member, said she became involved with the Healing Place in 2007 when she recognized the need for a recovery center in West Virginia was overdue.
“My daughter struggled with addiction for 10 or 12 years, and she lost her battle to addiction in March 2013,” Hibbard said. “She suffered and struggled more than anybody needs to suffer or struggle and there was just no help in the state.”

Rep. Evan Jenkins, R-West Virginia, said while the disease of addiction had grossly affected the city and state, the Healing Place provided remarkable transformations in individual lives and the community.
“Tragically we need more beds,” Jenkins said. “A hundred is a drop in the bucket, but it is an important drop in the bucket that we are proud to celebrate today. This is a process. Not a conclusion.”
Allen Henson, former program director of the Healing Place, passed away before he could see the organization expand. His daughter, Ashley Henson, was a witness to the announcement.
“I was actually seven months sober when I found out he was dying of cancer,” Henson said. “I walked in and he had a full-blown conversation with me, and it was the first time I’d really actually seen my dad sober.”
Henson said she has been sober for 28 months and still shares her father’s passion for the Healing Place.
”All the nightmares I had growing up with a father who was an alcoholic [are amended],” Henson said. “He’s making his amends to me through his death and sobriety with the men in the Healing Place.”
Henson said the alcoholism and substance abuse ran rampantly through her family. After an overdose claimed her brother’s life, her mother got sober two years later on the anniversary of his death.
“I would have never thought in a million years that my dad would be sober, or that I could be, so there is definitely hope for the hopeless,” Henson said. “I know that he fought in the firing lines of this disease and what an amazing war hero he is to the solution.”
The facility’s new beds are being pieced together Friday for new residents.
Lexi Browning can be contacted at [email protected]