It seems that the anti-feminist movement doesn't have a sense of humor. 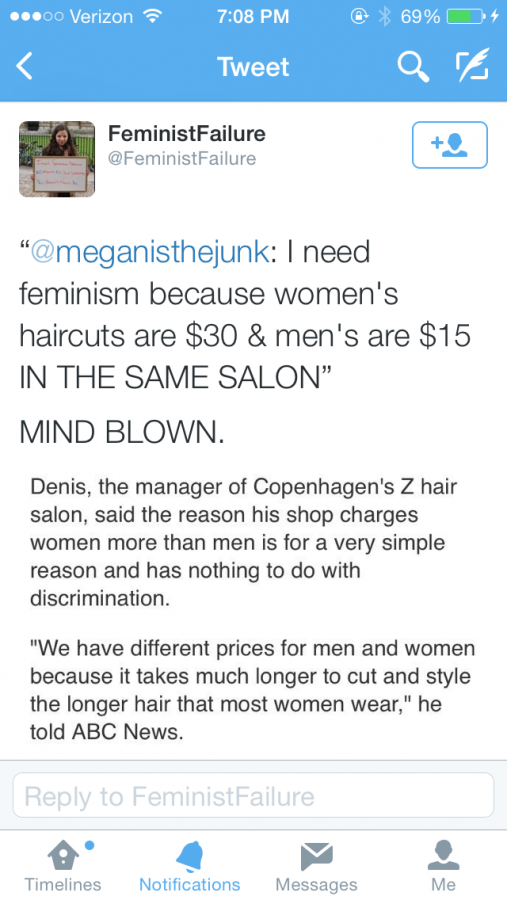 I decided to book myself a hair appointment the other day.

I noticed on the lovely user-friendly service selection application the salon uses that a “women’s cut and style” was $30 and a “men’s cut” was $15. And I thought “Aw man, all I really want is a trim.”

What followed my hair appointment booking is what I’m more concerned with.

Upon noticing the price difference, I thought of a half-serious joke and tweeted, “I need feminism because women’s haircuts are $30 and men’s are $15 IN THE SAME SALON,” and proceeded to go on about my day, knowing that my followers would likely understand the intentions of my tweet.

Much to my surprise, a couple hours later an anti-feminist account retweeted me, with an accompanying explanation as to why men’s and women’s haircuts are priced differently.

I thought to myself, “Ha,” and went about my day.

That is, until my phone started blowing up. Hundreds of notifications popped up one after another for hours, all from people favoriting and retweeting and replying to me being Twitter shamed.

I learned a lot about myself. Apparently, my tweet made me a stupid, sexist, socialist slut and, to quote one person who self-identifies as a troll, I am a “f—ing joke.”

I also got some great hair advice. Little do they know I’ve already been down the shaved head route, and I loved every second of it.

They argued about how feminism should be humanism and that I was making a petty argument and that men pay so much more for car insurance and pretty much every other statement in the meninist handbook.

I could go on and on debunking every argument that was made. I could defend myself. But I’m not going to, because I don’t owe them anything.

The fact that there are so many accounts in the Twitterverse specifically dedicated to seeking out feminist tweets and shaming them is truly reflective of where we are as a society, especially when one looks at who follows these things. Being surrounded by like-minded feminist people all the time, one sometimes gets the idea that the world is progressing in thought and that the ignorance is few and far between.

This was sort of a wake-up call. As I scrolled through the followers of the account that retweeted me, I noticed a trend. Most of them were young, white males who met the Internet troll stereotype. For whatever reason these dudes come to the Internet and bully everyone for fun, because hostility and aggressive Internet behavior is fun, right?

That was not surprising. What was very surprising was the amount of young, teenage girls. Most of these girls identified as strongly conservative, Christian, and/or clearly defined their distaste with feminism in their Twitter bios. I found this very sad and almost heartbreaking. Feminism is for everyone, but I feel that these girls are being indoctrinated in such a way that they have no idea that you can be Christian, conservative and a feminist.

Feminism is one of the only progressive movements, other than racism, that has such a definitive and hostile countermovement. I did not personally get any death threats, but women who voice their opinions on the internet are so often told to kill themselves or are threatened that it is concerning that there are enough people who think that way to cause a problem.

And who is mostly behind this? The young, white males of the Internet.

So forget the price of the haircut, I need feminism because of petty hostility.

I need feminism because of the girls who don’t think they need it.

I need feminism because of the entire anti-feminist movement and people who specifically seek out hashtags as a target for aggression.

But mostly, I need feminism because we are nowhere near where we need to be.