Coffee with the Mayor series concludes 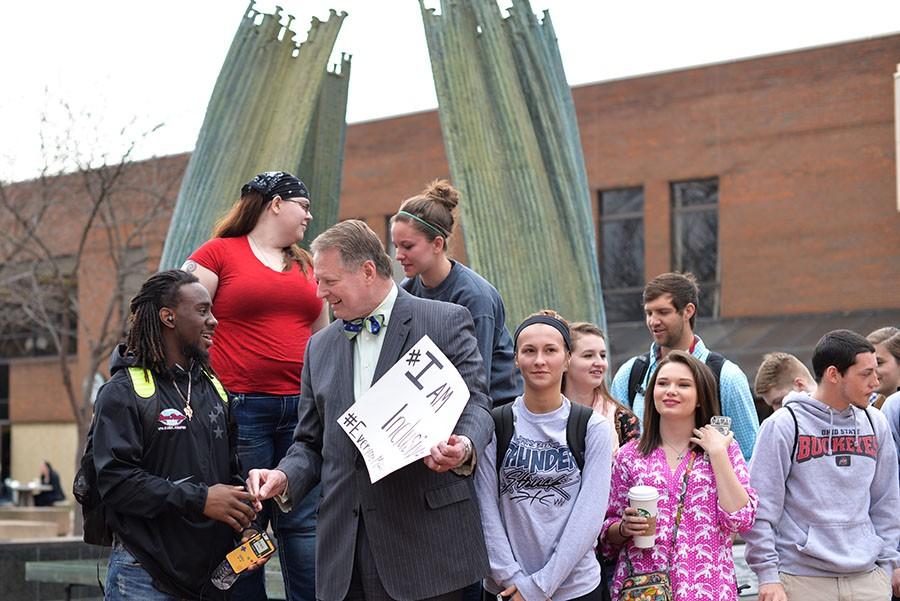 Students spend time with the mayor Thursday during the final Coffee with the Mayor event for the semester. During the event, Williams spoke to the students about Everone Matters Day, an initiative that recognizes the rights of the LGBT community.

The final installment of the Coffee with the Mayor series provided caffeinated encouragement Thursday as Huntington Mayor Steve Williams integrated Everyone Matters Day into his monthly Marshall University visit.
Williams met with students in the Memorial Student Center to discuss acceptance and individuality and carried a sign that read “#IAm Inclusive.”
Professor Kat Williams of the history and women’s studies departments brought three of her classes to the event.
Williams said Everyone Matters Day is especially important outreach following the recent legislative controversy in Indiana, where businesses could use the religious freedom law to potentially discriminate against members of the LGBT community.
“I thought it was important that our students have an opportunity to talk to him in general,” Kat Williams said, “but also in particular on this day because they need to understand that these issues are present in West Virginia. We do have leaders who understand the importance of stopping that kind of bigotry and discrimination, and he is certainly one of them.”
Kat Williams, who is also the LGBT liaison for the mayor’s office, said the mayor is especially dedicated to ensuring a discrimination-free environment for all Huntington residents.
“I think it’s been very well received,” Kat Williams said. “I hope that the students understand that this mayor is, in addition to being a graduate of MU, an advocate of the university and more importantly an advocate of a partnership between Marshall and the city of Huntington.”
The Rev. Timothy Dixon of the First Congregational United Church of Christ also serves on the mayor’s LGBT advisory committee.
“I totally support the mayor doing this,” Dixon said. “I knew he did it, but I think it’s cool that the mayor makes himself available to the students for this, and that speaks a lot of him.”
Dixon said the mayor’s LGBT advisory committee had started promoting equality in local businesses before the situation in Indiana became a nationwide dispute.
“The present project at the moment is to begin an open business campaign for all the businesses that reach out to the community to say that their door is open to everybody,” Dixon said, “which is coming in at a great time in reflection to what Indiana is going through right now,” .
Jo Cline, junior elementary education major, said his conversation with the mayor ended with helpful advice for his idea of creating an area for live campus entertainment.
“I asked him if we could find any way to have a place to play music on campus rather than Black Sheep Burrito and Brews because there’s not many places in Huntington to play,” Cline said. “He told me that I should get some people together and meet with the Dean of Student Affairs and have a word with him.” Williams said he is looking forward to pursuing another series in the upcoming fall semester.
“This has been wonderful,” Williams said. “We will continue as long as the university allows me to come back on campus we’ll continue to do this. This not only makes my day, it makes my month.”
Lexi Browning can be contacted at [email protected]