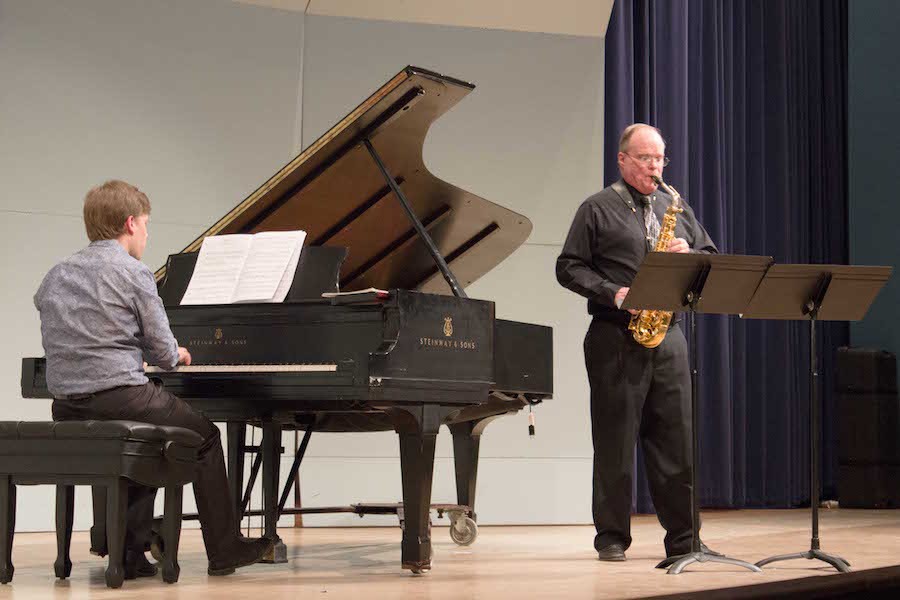 Marshall University’s College of Arts and Media presented a saxophone recital Monday featuring Edwin Bingham, Marshall professor of saxophone and jazz studies.
Bingham performed pieces by Yvon Bourrel, Paul Creston, Brent Pierce and Phil Woods.
Three movements were performed followed by a brief intermission.
Matt Taylor, professor of saxophone at Morehead State, Chris Clark, professor of saxophone and music department chair at West Virginia State University and Chris Mikel joined Bingham on stage for a finale movement.
“It is fun to work with people,” Bingham said. “It’s fun to have some collaboration with colleagues and get together and make music for the joy out of it.”
Henning Vauth, coordinator of keyboard studies at Marshall, accompanied Bingham throughout the recital.Christopher Rasmussen, student at WVSU, said his favorite part of the recital was the performance of the piece “Sonata, op. 19” by Paul Creston.

“I played the Creston sonata before, and that was my favorite because I knew it the best,” Rasmussen said. “But the other one that they played, the ‘Three Street Scenes’ was pretty cool too.”Bingham said two pieces performed contained elements of neoclassicism.
“Neoclassicism is sort of a harkening back to the classical period of Mozart and Hayden, but with contemporary musical language,” Bingham said. “So a lot of the music in the early twentieth century became very complex and very complicated and very dissonant. Neoclassicism is the return to simplicity and to a little bit less dissonance.”
Mikaela Keener can be contacted at [email protected]