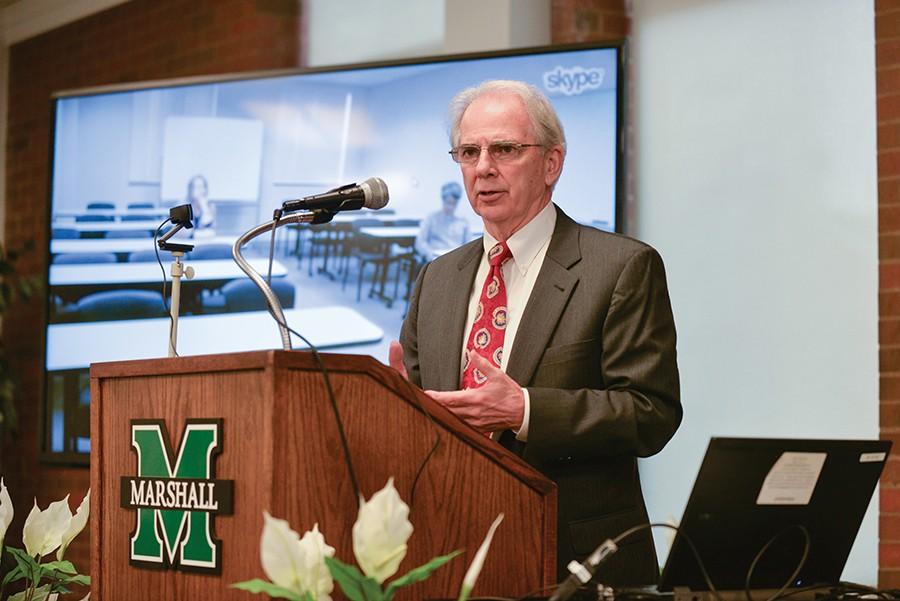 The search for Marshall University’s next president began Tuesday, as representatives from the Association of Governing Boards of Universities and Colleges met with university personnel.

Jim Lanier and Arnold Speert, representatives from AGB, explained the search process and gave Marshall faculty the opportunity to provide input regarding transparency, salaries and involvement.

Wendy Trzyna, associate biology professor, referenced the 2013 vote of No Confidence in President Stephen J. Kopp and said her concerns are primarily with the transparency of the new president’s financial decisions.

“I think [the vote] reflects that faculty desired a more transparent type of approach: one that was more open with more communication and collaboration including all the various stakeholders on campus,” Trzyna said. “We all have an interest in the university moving forward.”

Rules involved in the process of searching for a university president require a search committee, gathering input from constituencies and position announcement.

Remaining steps include selecting a search firm, interviews both off and on campus and the eventual implementation.

Jane Hill, chair of the English department, said she placed importance on reliability.

“One thing that can attract good people of presidential stature here is to look for someone who is a problem solver who likes to find productive solutions because I think there are some things that need fixing,” Hill said.

Hill said she has hired younger employees recently due to generational turnover.

“I think to keep people here, the first thing that has to be dealt with is that faculty have to feel respected and valued,” Hill said. “If you don’t have the money to pay people…then you need to have intrinsic rewards.”

Hill also requested diversity in the search and equal representation of women in the male-dominant administration.

Daniel Holbrook, chairman of the department of history, said investing time within local high schools would be vital for increasing Marshall’s student population.

“We do have a declining high school population and we have an abysmally low college going rate in the state,” Holbrook said. “One thing that Marshall should do more of is…partnering with the local school systems.”

Lanier said AGB’s review of Marshall included multiple strengths that would attract candidates, including the school of medicine, school of pharmacy and developing engineering program.

Beth Wolfe, director of recruitment, said she had two priorities in terms of the new president search.

“One [priority] is someone who will surround themselves with experts on campus and understand that they cannot do everything themselves and then rely on the experts in their respective areas to do the heavy lifting and go to them for counsel with decisions,” Wolfe said.

Wolfe said a necessity of uniqueness is in order.

“[We need] someone who desires to make Marshall the best Marshall,” Wolfe said. “Not a duplicate of another institution.”

The selection process and eventual implementation is anticipated to be complete by mid-May and if delayed, by July.

Lanier said the agency placed emphasis on selecting a new president before the fall semester started.