“It feels real good, but we still got more work to do." -Sophomore forward Ryan Taylor 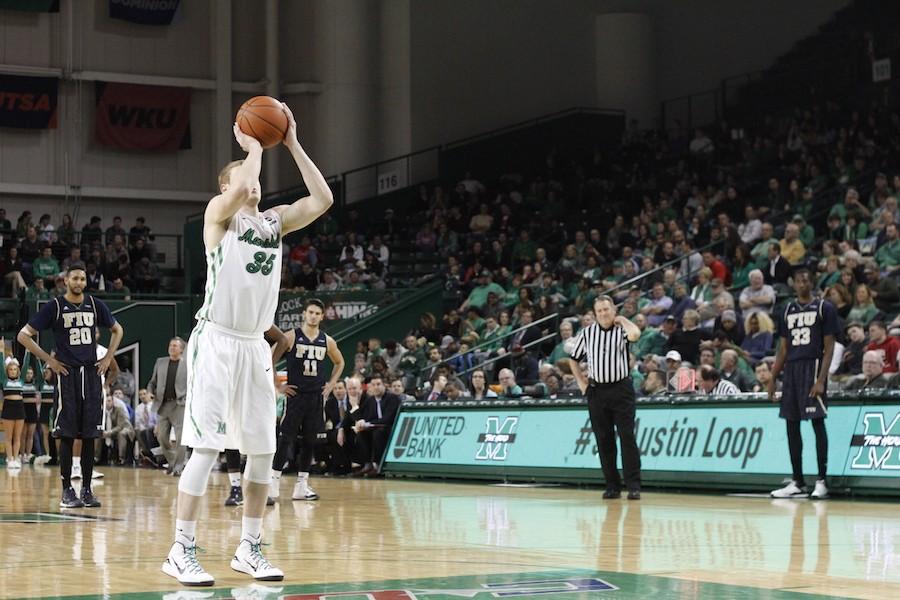 The Thundering Herd takes on the Florida International University Golden Panthers at the Cam Henderson Center Thursday. The Herd rolled to an 87-69 win, solidifying its spot in the C-USA tournament.

Marshall University’s men’s basketball team dominated Florida International University Thursday 87-69 on its way to its sixth win in its last nine games, securing the team a spot in the C-USA tournament.

“It feels good,” said Ryan Taylor, sophomore small forward for the Herd. “It feels real good, but we still got more work to do. Just going there isn’t going to satisfy us. We want to go there, win and get the automatic bid and then go to the NCAA tournament. So, we’re happy, but we don’t want our heads getting too big.”

Head coach Dan D’Antoni said he was confident his team would make it in the tournament, even during the Herd’s nine-game losing streak this season.

“It seems like yesterday, but two months ago, we were getting tagged by everybody and were in last place,” D’Antoni said. “I said ‘Fellas we’re going to get in this tournament. I don’t care how we do it. We’re going to get in there somehow.’ And you know, from that point they’ve made it easy and I’m proud of them.”

Taylor said the team’s turnaround this season is partly due to the young team maturing.

“Everyone can see us maturing day by day,” Taylor said. “We’re definitely not a slouch in the conference. Teams don’t take us lightly. We just have to come out every night and bring our ‘A’ game.”

The Herd has its final home game of the season 7 p.m. Saturday as it takes on Florida Atlantic University at the Cam Henderson Center.