From linebacker to athletic director 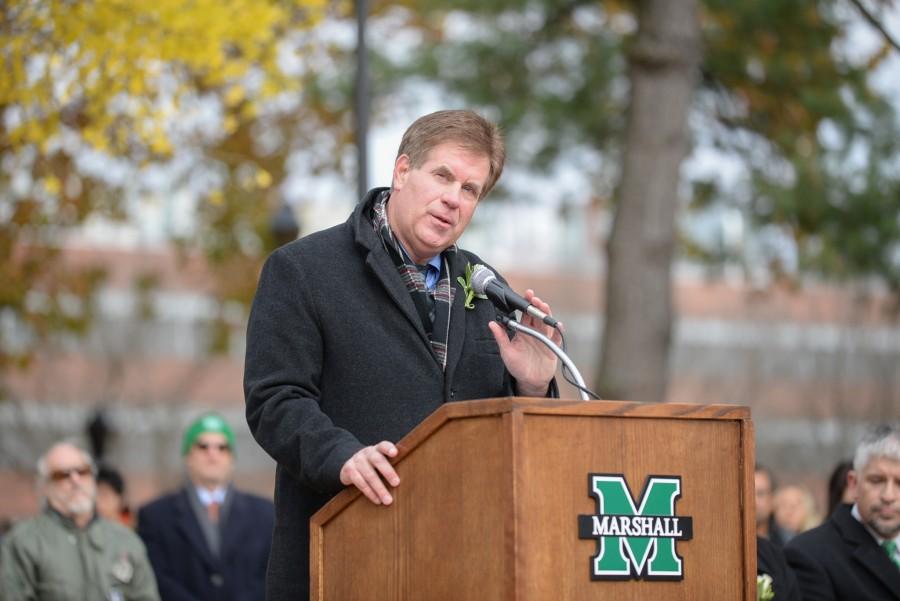 In 1980, Mike Hamrick hung up his football helmet and received his diploma in secondary education from Marshall University.

Hamrick said his original goal was to become a teacher and coach high school football like his father.

Thirty-five years after his college graduation and after working in athletic departments across five other states, Hamrick is now Marshall’s Athletic Director.

Hamrick’s journey back to Marshall was one he anticipated.

“When I left Marshall I said, ‘You know what, one day I’m going to come back here and be the athletic director,’” Hamrick said.

Hamrick was a starting linebacker for two seasons, and his older brother Ed Hamrick was the place kicker for three years.

“It wasn’t too big, but it wasn’t too small, and I wanted to be a part of building the program back from the plane crash,” Mike Hamrick said.

During Mike Hamrick’s freshman football season with the Herd in 1976, the team beat the then nationally ranked, Miami of Ohio.

Miami was ranked 14th, and Mike Hamrick said there was little hope Marshall would claim a victory.

Mike Hamrick said the game started with around 6,000 to 7,000 people in attendance, but when rumors circled Huntington that Marshall was ahead at halftime, around 12,000 to 13,000 people came to watch the second half of the game.

“No one could believe it, but people were listening to the radio, and so we gave people a little hope that you know, Marshall could eventually win,” Mike Hamrick said.

After getting his master’s degree in sports administration at the University of Ohio while serving as an assistant coach on their football team, Mike Hamrick married his college girlfriend. The two moved to Las Vegas where he started working with the athletic department at the University of Nevada.

Mike Hamrick’s journey brought him back to UNLV in 2003, where he said he and his wife planned to retire.

“Then Dr. Stephen Kopp called in 2009 and said he would like to visit with me,” Mike Hamrick said.

Mike Hamrick said he was impressed with President Stephen J. Kopp’s vision for Marshall and was determined to build Marshall’s athletic program.

According to the athletic department, Mike Hamrick’s work in his six years as athletic director has put $42 million into improving facilities or building new facilities, such as the Chris Cline Athletic Complex and the Veterans Memorial Soccer Complex.

“I didn’t come here to retire, I can promise you that,” Mike Hamrick said. “I came here to try to make a difference.”

Mike Hamrick said when he came back to Marshall he saw needs and did his best to meet them.

He said within the first few weeks he was hired, he saw the track athletes running in the concrete hallways of the Cam Henderson Center. The team practiced in the Cam because Marshall did not have a track.

“It’s been very rewarding to provide these current student athletes with things I never had when I was a student athlete here, like facilities and good coaching and good places to go play,” Mike Hamrick said.

Because Mike Hamrick was a student-athlete, coach and worked in athletic administration, he said he can relate to the pressures athletes have placed on them.

“When they have tough losses, I know how they feel,” Mike Hamrick said.

Hamrick said he learned many lessons in the classroom at Marshall, but the biggest lesson he learned was on the football field.

“Being a football player here in the ‘70s when we didn’t have a lot of success, I learned to fight through that and persevere through those difficult times to be successful,” Mike Hamrick said.

He said in his almost 30 years away from Marshall, he never stopped following the school and was unsure if he would have the opportunity to return.

“If I had to do it over again,” Hamrick said. “I would have done the same thing.”

Kasey Madden can be contacted at [email protected]marshall.edu.