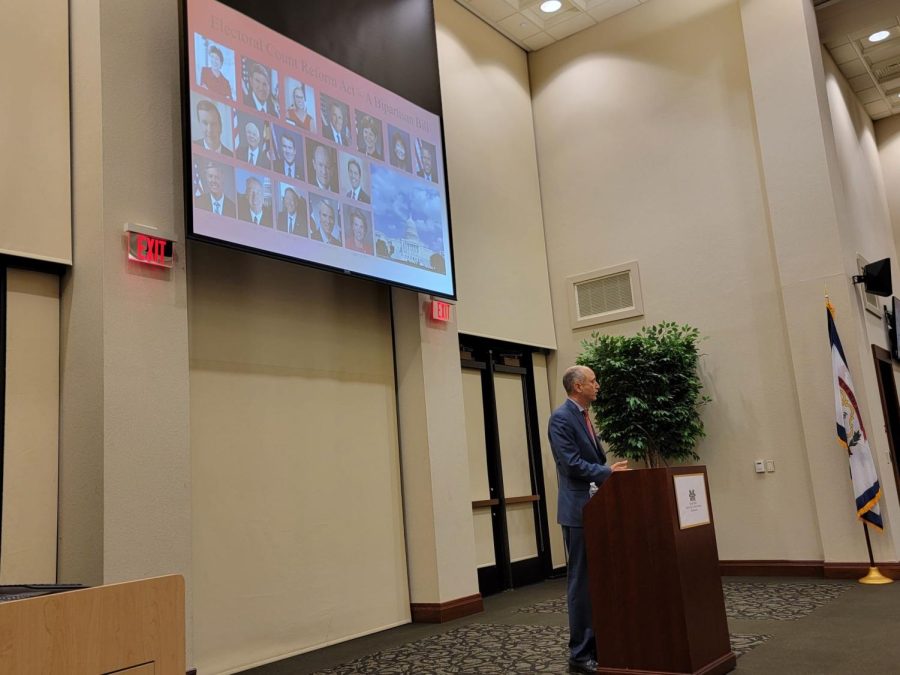 The resignation of election workers nationwide threatens the security of American democracy, according to the Amicus Curiae series’ most recent lecturer, Lawrence Norden.

Norden works as senior director of the Elections and Government Program for the Brennan Center for Justice at the New York University School of Law. He came to Marshall on Thursday, Sept. 22, to discuss the effects that election fraud claims from the 2020 presidential election have had on American election law and democracy.

“I wanted to get the most qualified, most respected in the area for this lecture,” Patricia Proctor, host and organizer for the Amicus Curiae lecture series, said. “And that man is Larry Norden.”

According to Norden, election workers nationwide, including poll workers and clerks, have resigned from their positions after receiving death threats, verbal abuse and wrongful accusations of committing fraud during the presidential election in 2020. He explained that even after the courts rejected such accusations, election workers still continued to receive threats.

“Many of the people we depend on for our democracy now face constant fear for their safety,” Norden said.

He also described how political officials in several states have suggested that election officials should be investigated and how state legislatures have passed laws to criminalize election workers.

In Texas, it is now a crime for election workers to encourage mail-in voting, which Norden believes is a fundamental part of both the worker’s job and American voting rights.

Additionally, Norden explained the negative impact that the widespread resignation of election workers will have on elections moving forward.

“Fewer, less experienced election workers will probably mean there will probably be more mistakes—less capacity to respond to those mistakes when they happen,” he said. “This is, I think, highly dangerous in an environment where conspiracy theory-driven individuals are preparing to amplify even the smallest mistake that they feel validates their belief.”

Norden went on to say those who believe in the idea of a stolen election may replace these resigning election workers while at the same time seeking to undermine future elections’ security and integrity. He said some states have proposed laws to put the power of certifying elections in the hands of partisan legislatures rather than those facilitating those elections. However, none of the mentioned laws have passed.

“The next few years are going to determine how corrosive election nihilism is for our democracy,” he said.

As for those people not in a position of political power, Norden recommended talking with others about American democracy and what it means to preserve and strengthen it. He also encouraged learning more about the election process and the safety checks in place to ensure a free and fair election.

Resources mentioned include the Brennan Center for Justice’s website, the Committee for Safe and Secure Elections’ website, the Cybersecurity and Infrastructure Security Agency (CISA) and the U.S. Elections Assistance Commission.

The next Amicus Curiae lecture will take place at 7 p.m. on Tuesday, Nov. 1, in the Brad D. Smith Foundation Hall with Professor Emerita Nadine Strossen from the New York Law School.