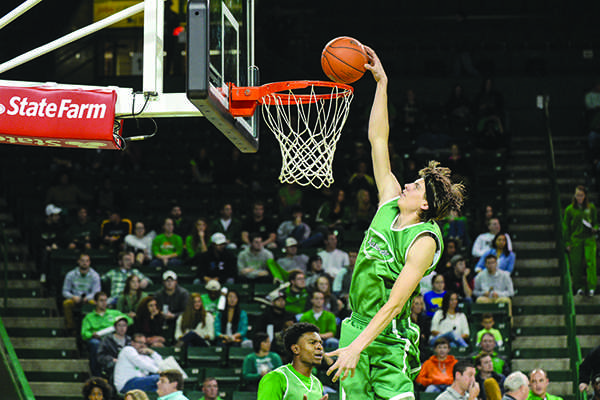 Members of the Thundering Herd men’s basketball team kickoff the season with Thundering Madness on Thursday, Oct. 23 at the Cam Henderson Center.

However, the teams are heading in different directions. The Herd won four of its past five contests and most recently came off of an upset victory over Western Kentucky University, 87-82. MTSU dropped three of its past four matchups and capped off the stretch by losing a heartbreaker to University of North Texas, 57-56.

“It’s fun, it’s not like you’re pulling teeth,” D’Antoni said. “It’s a great time in your life as a coach and as a player.”

The last time both teams met was  Feb. 2, 2014 when Middle Tennessee squeaked out a win in Huntington, 56-53. The Blue Raiders had seven seniors on that team but the Herd has lost some key players since then,as well. Former starting point guard Kareem Canty transferred to Auburn University among other roster shake-ups.

The Herd was on the outside of the conference tournament looking in just a few weeks ago, but now it finds itself climbing the ranks at a rapid pace.

Sophomore forward Ryan Taylor said losing 12 of 13 games at one point in the season did not deter his team’s confidence.

“We’ve seen teams come out of streaks like that and be good,” Taylor said. “We can make it into the tournament as a 12 seed, but if you’re playing, and you’re hot, it doesn’t matter what your record is.”

The game was originally scheduled for 8 p.m. Thursday but weather conditions have forced the start time to be 5 p.m.

Marshall will face University of Alabama at Birmingham 8 p.m. Saturday to round out its two-game road trip.

Adam Polsky can be contacted at [email protected]