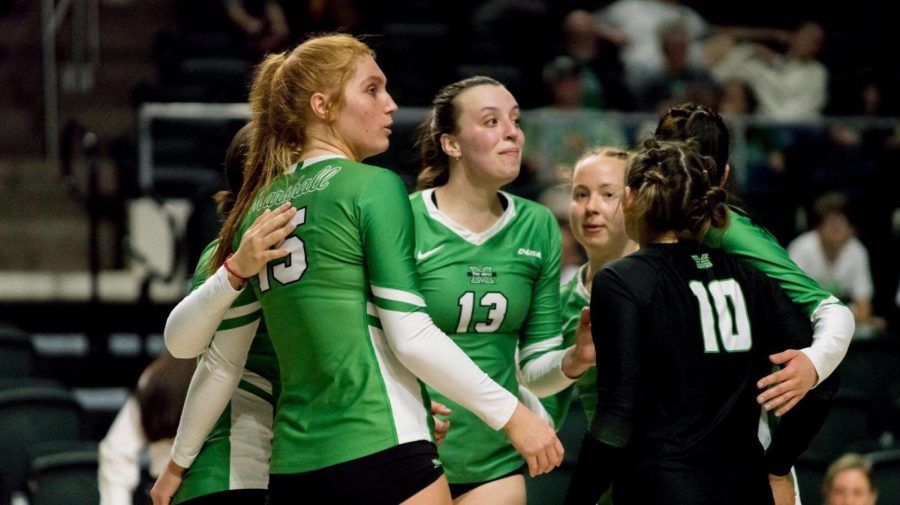 The Marshall volleyball team trekked south and came out with a three-set sweep of the hosting Furman Paladins on Friday night.

Coming off of a rough home-stand for the Herd at the Marshall Invite Tournament last weekend, this quick trip to the Palmetto state kicked off with an assuring, dominant victory.

Success found the Herd early and stayed for three straight sets, bringing the herd back to an even five-five record. The Lady Paladins failed to gain ground on the visitors, lying on their home court.

Herd mainstay Macy McElhaney produced another solid outing with 16 kills, followed by Jazz Parish with 10 of her own. This three-match evening featured Marshall focusing on spreading the wealth, with numerous players carrying their weight in performance.

Furman held their own in the first two sets, losing by three and two points, respectively. Volleyball doesn’t award close efforts, and the Paladins found themselves in a hole despite hanging on in the sets.

Set three wasn’t as close, however. Marshall dominated in the final set from the get-go and didn’t let Furman keep it close. The ladies in green doubled over the hosts for a final score of 25-12.

This concluded a tremendous bounce-back night for Marshall volleyball, which has a quick turnaround coming up in nearby Spartanburg, South Carolina, on Saturday. Marshall will be taking on South Carolina-Upstate to wrap up their short road trip to the Carolinas.

The team is still searching for its identity with an even .500 record ten games into the 2022 campaign. Marshall seems to be relying on a solid kill game from heavy influences from McElhaney and Brynn Brown. Be on the lookout to see them continuing to break out throughout the year.