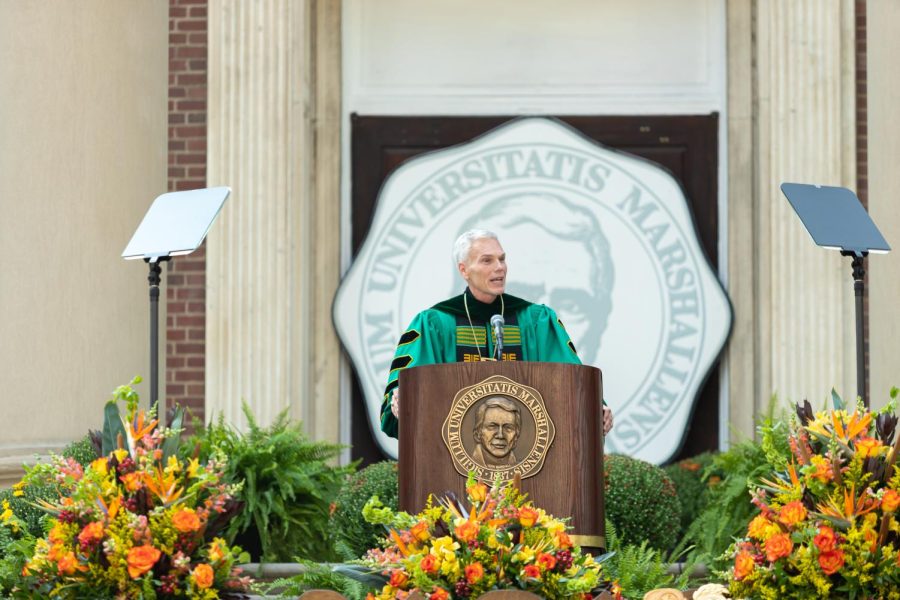 Brad D. Smith speaks at his investiture on Friday.

During the investiture of 38th university president Brad D. Smith, Smith waited until the end of his speech to announce a goal that would dramatically change the landscape of Marshall University.

“In 10 years, no Marshall student will graduate with student debt,” Smith said.

Smith said the university needs to raise $300 million to achieve this goal, an amount that he believes is possible in part due to the recent “Marshall rises” campaign that raised over $100 million in just a few years.

“I have complete confidence… people have been looking to see what is the vision we can latch on to after Marshall rises, and everyone wants to help the next generation,” Smith said.

The program will contain four pieces: students filling out a FAFSA every year, asking for family contributions to match what is expected from FAFSA, a robust work-study program and encouraging students to graduate in four years. After students graduate, the university will attempt to use scholarships and grants to offset the remaining bill for the student.

Smith said during his speech that 63% of Marshall students leave with an average of $26,000 in debt. Student debt has been a pressing issue politically, with President Biden announcing last month a plan that will wipe out tens of thousands of student debt for millions of Americans.

Smith said the first 100 students will be selected randomly, but based proportionally on what states and counties students come from.

During his speech, Smith was honest about the financial situation the university has found itself in. Since 2010, enrollment at Marshall has decreased by 22%. Smith likened the situation to a golfer being stuck in the sand trap saying: “We might be in the sand trap, but we have the right club and the right swing to get out.”