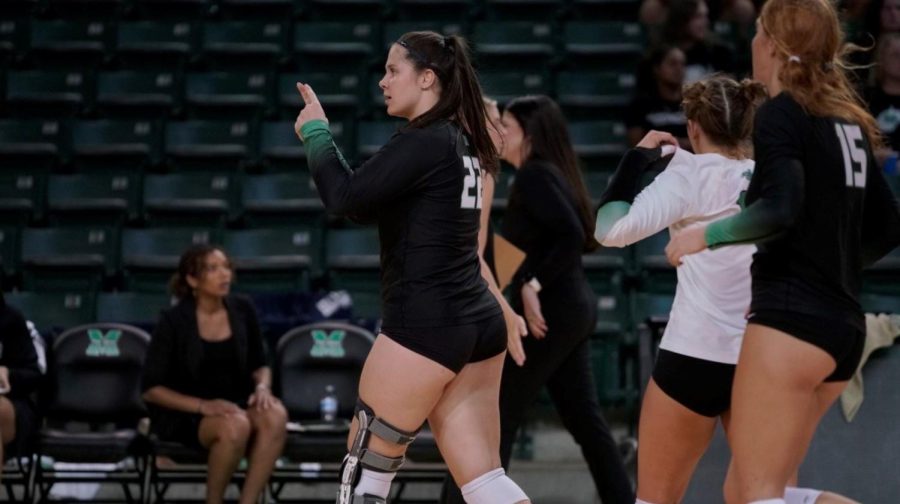 The Marshall volleyball squad had their chance to impress a home crowd at the Cam Henderson Center this past weekend, yet squandered their last two matches in what ended up being a long tournament for the Herd.

Success attended the hosting Herd in a Friday night “Blackout” game on Sept. 9, using offensive fireworks to dominate the Buccaneers of Charleston Southern University. A well-rounded performance from 6-foot-1 senior powerhouse Lydia Montague led the ladies in green to a 3-match sweep, accompanied by supporting efforts from the three-headed kill machine known as Regan Tinkle, Macy McElhaney and Essence Clerkley.

“Each player in our program did a phenomenal job,” Ari Aganus, Marshall head volleyball coach, said.

However, woes appeared the following day as Marshall dropped both games of the Saturday slate on Sept. 10. Kicking off the struggles for the day, Marshall fell to Murray State in 4 sets after being dominated by their decisive kill game. Marshall had multiple players making big plays and putting up good numbers, yet they didn’t secure the win.

Frustration continued into the final matchup of the weekend for the hometown Herd, as they had a date with the Golden Flashes of Kent State. Off to a scorching start this season, Kent State gave Marshall more than they could handle, taking down the hosts in a brutal five-set war. Once again, great showings from the usual suspects for Marshall, but not enough to seal the deal.

Breakout sophomore star Brynn Brown racked up a whopping 49 assists to pair with a career-high 19 kills from Montague, but this was still not enough to close out the weekend with a win. Marshall falls under .500 after going 1-2 on the weekend, and now sits at 4-5 on the season.

The squad will take a trip down south to Greenville, South Carolina, on Friday, Sept. 16, to take on Furman University. Saturday entails a trip to nearby Spartanburg, South Carolina, to face off with the University of South Carolina-Upstate—one last trip before the Sun Belt schedule starts later this month.