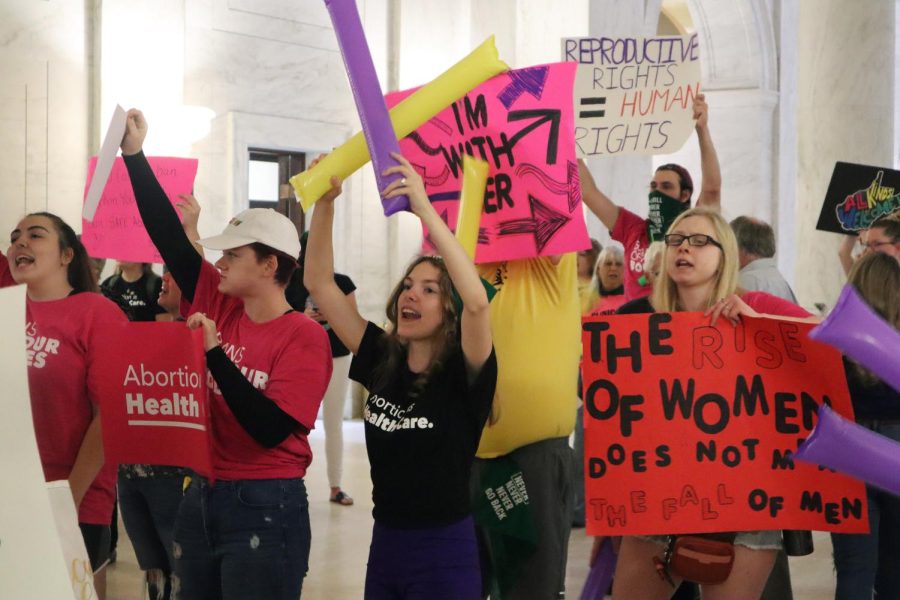 Protestors rally outside the Senate chamber at the West Virginia state Capitol in Charleston, W.Va., as lawmakers debated a sweeping bill to ban abortion in the state with few exceptions on Tuesday, Sept. 13.

CHARLESTON, W.Va. (AP) — West Virginia’s Governor Jim Justice signed a sweeping abortion ban with few exceptions Friday, approving a bill that several members of the Republican supermajority said they hope will make it impossible for the state’s only abortion clinic to continue to offer the procedure.

“It is going to shut down that abortion clinic, of that I feel certain,” Republican Sen. Robert Karnes said on the Senate floor, amid shouts from protesters standing outside the chamber doors. “I believe it’s going to save a lot of babies.”

Under the legislation, rape and incest victims would be able to obtain abortions at up to eight weeks of pregnancy, but only if they report to law enforcement first. Such victims who are minors would have until 14 weeks to terminate a pregnancy and must report to either law enforcement or a physician.

Rape and incest victims would have to report the assault within 48 hours of getting an abortion, and a patient must present a copy of a police report or notarized letter to a physician before the procedure can be performed.

Abortions also would be allowed in cases of medical emergencies.

Both the Senate and the House of Delegates speedily approved the bill, after several hours of debate.

Lawmakers inserted several provisions they said were specifically targeted at the Women’s Health Center of West Virginia, which was the state’s first abortion clinic when it opened in 1976 following the U.S. Supreme Court’s landmark case Roe v. Wade. It has existed as the state’s sole abortion clinic for years, making it the ever-increasing target of anti-abortion lawmakers and protesters.

The bill states that surgical abortions can only be performed at a state-licensed hospital by a physician with hospital privileges. Anybody else who performs an abortion, including nurse practitioners and other medical professionals, could face three to 10 years in prison. A physician who performs an illegal abortion could lose their medical license.

Pregnant people who obtain illegal abortions will not face any form of prosecution under the bill, however.

Kaylen Barker, spokesperson for the Women’s Health Center of West Virginia, said the clinic will not be shutting down, even if the staff is no longer able to provide abortions. Like many clinics that perform abortions, the facility did not offer the procedure daily.

Most days are dedicated to services like gender-affirming hormone therapy, HIV prevention and treatment and routine gynecological care — cervical exams, cancer screenings — mostly for low-income patients on Medicaid with nowhere else to go.

Democratic Sen. Owens Brown, West Virginia’s only Black senator, spoke against the bill before it passed the Senate. He said when he looks around at his fellow lawmakers, he sees a body that is overwhelmingly comprised of white, middle-aged to elderly men who are middle-class or above.

Brown compared groups of men passing legislation that overwhelmingly impacts women to laws that were passed by white lawmakers when slavery was legal in the U.S. He said “all laws are not good laws made by men.”

“That’s somewhat irrational in many ways to be able to apply a law that will never apply to you,” he said to his fellow lawmakers. “It’s easy for you to sit there and do that because you will never have to face the consequences of your actions.”