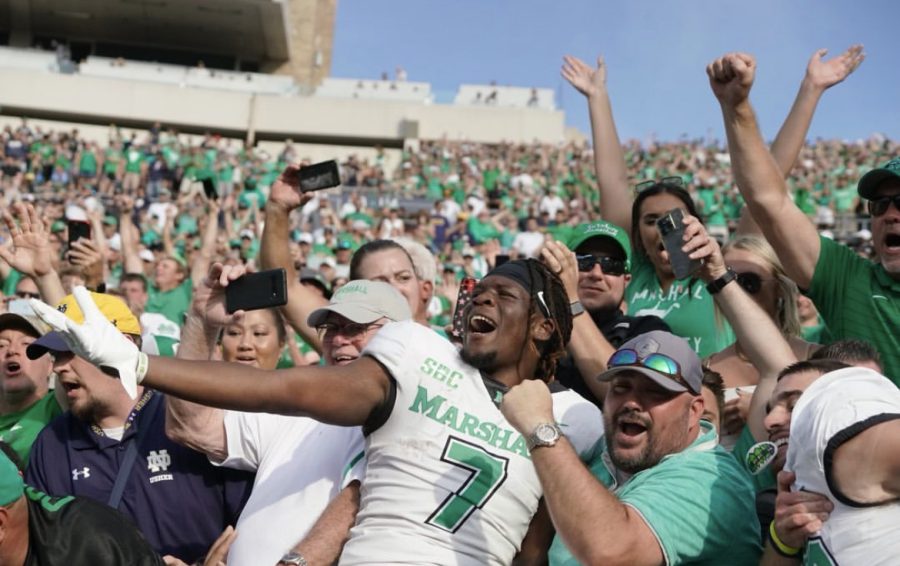 Marshall stunningly upset No. 8 Notre Dame by a 26-21 score Saturday evening on Sept. 10.

“We believed in ourselves and not many did,” Colombi said, “but from the start of the season, we knew we were going to have this test. We have a bunch of ‘I got you guys’ players in this room, and it was special to see today.”

Colombi added that the team felt like they belonged with Notre Dame.

“We understood we belonged in this game, we believed they weren’t better than us,” he said.

Marshall’s running back, Khalan Laborn, had 31 carries, rushing for 163 yards with one touchdown.

Marshall’s head coach, Charles Huff, said he was proud of what his team did Saturday.

Huff added that the team expected to win Saturday.

“No disrespect to Notre Dame, but in-house we expected it because we talked this summer about how we expect to win every time we touch the field,” Huff said. “That doesn’t mean we will every time, but it means our expectation level won’t allow the moment, the team, the opponent and the week to be too big for us.”

This is Marshall’s second time upsetting a top-10 team, with the first against Kansas State in 2003.

Marshall will look to keep the hot start going as they go on the road against Bowling Green next week.