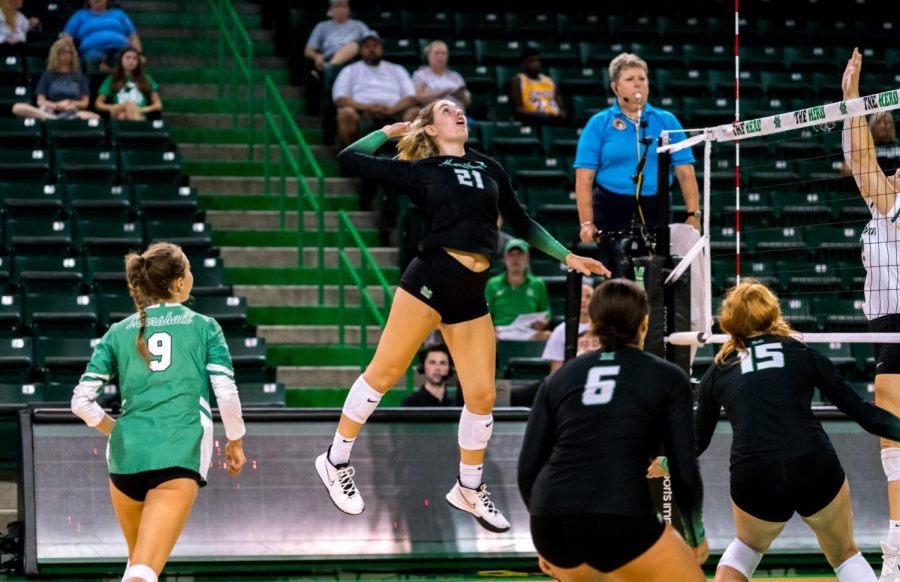 Resilience was the name of the game for the women of the Thundering Herd over the past weekend, taking two of three games.
The Herd trekked to Oxford, Ohio, last Friday for two days of volleyball action in Redhawk territory. The ladies took on Bellarmine University and the home-court Redhawks of Miami in a Friday doubleheader, splitting the two games.

The first game on Friday spelled victory for the ladies in green and white, sweeping the Knights of Bellarmine three sets to none. Despite the Knights edging out Marshall in kills and assists, strong outings by Herd stars featured three players in double digits for kills. An overall team effort and consistency led head coach Ari Aganus to say, “Our sweep against Bellarmine is one to be proud of” (Source: Herdzone).

Game two of the weekend didn’t go as smoothly as its predecessor, with Marshall losing a tight competition with the hosts, Miami. Marshall lost in five sets, despite significant efforts to rally. Brynn Brown, a sophomore star for the Herd, recorded yet another triple-double (31-20-10) in the losing effort. This was her third recorded triple-double of the young 2022 campaign. Great stats to the wayside; Miami prevailed and found ways to counteract the hot hands like Brown. Rough starts led to big holes to crawl out of, leaving the deciding matches to fall in favor of Miami.

Resilience came into play on Saturday, however, as Marshall bounced back from a rough evening with a five-set victory over former Conference USA foe Middle Tennessee State. The team showed grit, and possibly its identity for the season, in this game. Coming off of an evening loss that went to the wire, straight into an early game against a former familiar face is no easy task, but Aganus’ crew got it done. Regan Tinkle led the charge with a career-high 19 kills on the day and ended the weekend in Oxford with a feel-good win.

Looking ahead, the 3-3 Thundering Herd takes on the Buccaneers of Charleston Southern University this Friday at 6 pm. It’s the first of yet another three matches on the weekend as the team hosts the Marshall Invite at the Cam Henderson Center.