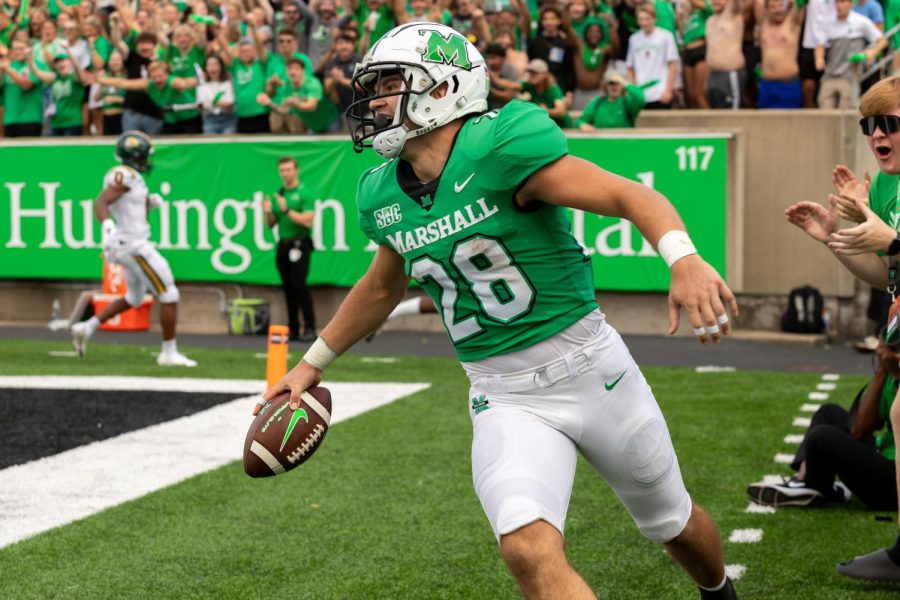 In the team’s season opener at Joan C. Edwards Stadium, the Marshall football team made a statement in front of 24,607 spectators.

In the team’s first game as a member of the Sun Belt Conference and second year under Charles Huff’s tenure as head coach, the Thundering Herd would completely disassemble the Norfolk State Spartans in a 55-3 blowout.

​After the departure of Grant Wells to Virginia Tech, Marshall acquired former Texas Tech QB Henry Colombi via transfer. Colombi’s first start as a member of the Thundering Herd was solid as he was able to complete 24 out of 26 passes for 205 yards, including a 13 yd touchdown pass to WR Corey Gammage and one interception.

Running backs Ethan Payne and Khalan Laborn proved to be a deadly combination against the Spartan’s defense. Payne and Laborn would combine for 215 rushing yards, whilst individually racking over 100 rushing yards, a feat that was last accomplished by RBs Keion Davis and Tyler King against the Colorado State Rams in the 2017 New Mexico Bowl. The two combined for 4 TDs on the day. Marshall’s offense only punted on its opening possession.

Marshall’s defense was dominant in its own right. Despite possessing the ball for nearly 24 minutes the Spartans offense could only muster 5 first downs, 114 total yards, 1 third down conversion out of 12 attempts and a field goal late in the third quarter to prevent a complete shutout.

​“I’m really proud of the players.” Coach Huff said, “I’ve challenged them all week to play 60 minutes of dominant football and not look at the scoreboard.”

​Huff also believed that today’s dominant game NSU would set a foundation for competition as the team looks ahead toward facing #5 Notre Dame in South Bend.