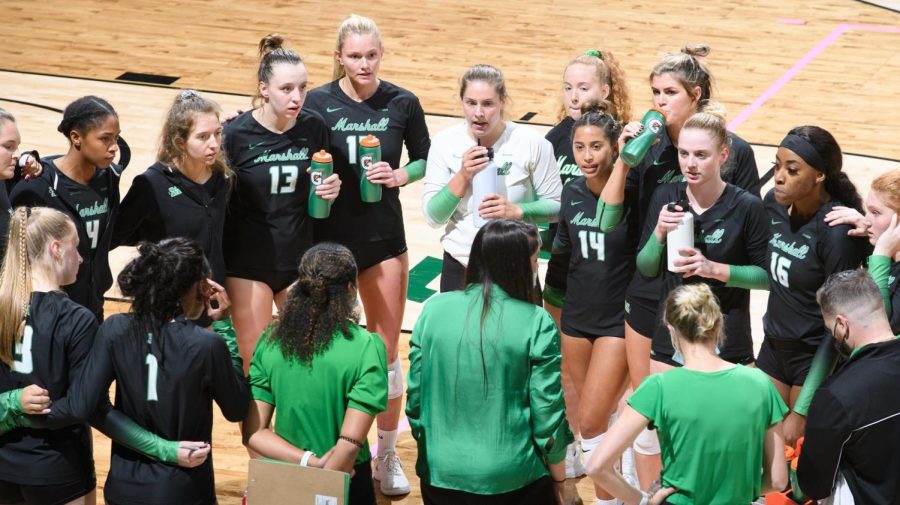 This past weekend kicked off the Thundering Herd volleyball campaign for the 2022 season as the Marshall Invitational ruled the Cam Henderson Center court.

A handful of games held the focus of dedicated fans eager for the season to get underway. The Herd competed in three contests between Friday night and Saturday, facing Evansville University twice and Wright State to complete the trifecta. The hometown ladies took home game one Friday evening against the Purple Aces of Evansville, winning the season opener 3 sets to 2. A back-and-forth affair filled with a copious number of kills from Macy McElhaney (17 kills on the night) ended in a victory for the green and white.

The Saturday slate was not as kind to the hosts, however. A doubleheader featuring Wright State in the matinee matchup was not the morning wakeup call the victors from the night before wanted. Brynn Brown and Lydia Montague led the Herd with 13 kills each, but it wasn’t enough to match the opposing attack, concluding with a contested fourth set that saw a late push for a Wright State victory.

The evening continued a downward spiral for Marshall with a consecutive loss to the Purple Aces, evening out their pair of games with the Herd. A second straight loss after winning their first game on Friday, Marshall head coach Ari Aganus was explicit in her disappointment and frustration. Aganus’ crew will be back in action and looking to bounce back this Friday, September 2nd, with a doubleheader kicking off their weekend in Oxford, Ohio, for the Miami Invitational.