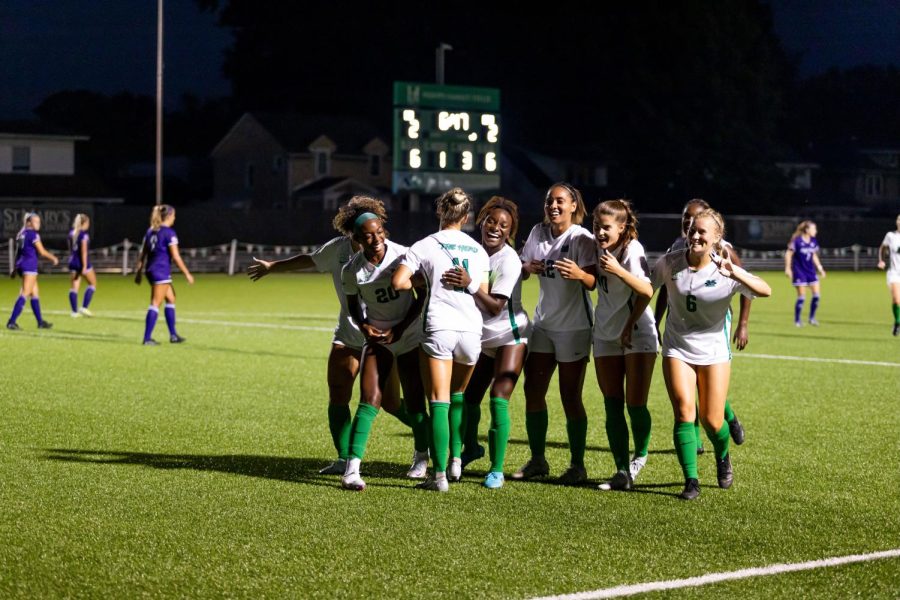 The Marshall University women’s soccer team (0-0-1) rallied late for a 2-2 draw against High Point (0-0-1) in its season opener on Thursday night at Hoops Family Field.

“You don’t end games with a point or a win very often when you go down a goal twice,” Marshall women’s soccer head coach Michael Swan said after the match. “Typically you fight so hard to get back into it you crumble. Tonight we didn’t crumble. I couldn’t be prouder of the group.”

Herd goalkeeper Regan Meyer stopped the opening shot on goal by Panthers forward Emily Mashinski in the 18th minute. However, Skyler Prillaman struck first as HPU took a 1-0 lead at the 25:42 mark.

Marshall nearly equalized on shots by Bailey Fisher in the 33rd and Abi Hugh in the 38th minutes, but both shots were saved by Morgan Hairston.

Meyer recorded saves in the 41st and 42nd minutes to keep the deficit 1-0 at halftime.

Coming out of the break, midfielder Kat Gonzalez took the ball in the Panthers’ 18-yard box and found the back of the net to draw even, 1-1, in the 49th minute.

High Point regained the lead, 2-1, over Marshall at the 56:03 mark as Bri Davis tallied a goal on an assist by Sam Gerhart.

Just 27 seconds after the Panthers scored, Morgan White had an attempt saved by Hairston. Gonzalez followed with a shot on goal in the 65th minute, but it was saved by the HPU goalkeeper.

Meyer came up with a key save for the Herd on a shot by Davis in the 73rd minute to keep the deficit at 2-1.

11 minutes later, Hugh took the ball down the left wing. The junior sent in a cross and found White at the right post as she headed home the pass to tie the contest 2-2.

Prillman had the last shot of the match for High Point in the 88th minute, but it went wide left with the game ending in a draw.

“Going forward we have flyers and creativity, and we showed that for glimpses tonight,” Swan commented. “The crowd was absolutely phenomenal. We couldn’t have asked for a better crowd. Thanks to everyone at Marshall University for bringing the WoW (Week of Welcome) crew. They were absolutely amazing and wanted us to win the game in the last five minutes.”

UP NEXT
MU is back in action at Hoops Family Field on Sunday when hosts Akron at 1 p.m.