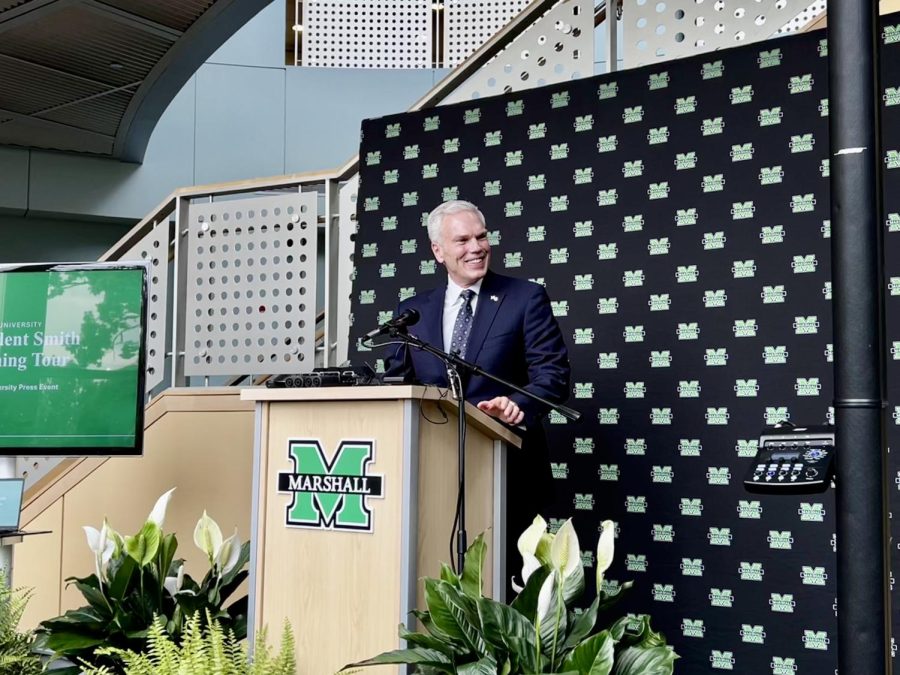 Smith described the issues he and his cabinet have been addressing first, including the “urgent need to reverse the downward trend” in enrollment, additional student resources like tutoring and mental health services, filling staffing gaps and increasing pay and refocusing and improving marketing efforts.

Smith said that over the 38 listening sessions more than 1,000 people participated and more than 1,200 suggestions were given.

“I got gold,” Smith said describing the suggestions offered during the listening tour.

Smith said he visited with over 18 former or current university presidents from other institutions and visited six other campuses during his listening tour.

Enrollment was the top concern throughout the listening tour. Marshall’s enrollment has shrunk from 13,971 in 2011 to 11,144 in 2021 according to data published by the university. Smith and his team will look to increase enrollment outside of the traditional areas and demographics Marshall has served in the past. Smith specifically mentioned Marshall’s student population relying on students from West Virginia, specifically the southwest part of the state, which has suffered significant population loss and economic hardship. This would not just increase enrollment, but increase opportunities for a diverse student body as well.

“We have been fishing in a pond that’s getting smaller, and in some cases getting harder hit,” Smith said.

Smith has been in office since January after a semester-long presidential search after former university president Dr. Jerome “Jerry” Gilbert announced his resignation in April of 2021. Smith is a Marshall graduate and the former CEO of Intuit.

Another top issue from the listening tours is the student experience. Smith says he would like to see Marshall shift from a “student-focused” to a “student first” university to better compete with educational alternatives.

“We’re stepping back and asking ourselves what is the perfect experience for an 18-year-old, for a working adult, for someone with a full-time job, someone international, and how do we create an awesome end-to-end experience for different students,” Smith said.

Smith and his team are mystery shopping the student experience of specific groups of students.

“An adult student doesn’t get a lot of benefit if the bookstore closes at 5, and you need to have access to the hours they need. So we are going to have to re-imagine how we serve all those students,” Smith said.

Smith also has prioritized creating a “high-flex” environment that will allow students to be more flexible in how they learn through technology. This was also addressed as a top priority in the capital projects at the board of governors meeting last week. Certain selected classes will become part of the pilot program for the high-flex model.

“High-flex means it happens simultaneously,” Smith said. The program would create a re-imagined classroom with multiple cameras, and screens in the front and back of the room. Classes would also be recorded for later access. Smith said this model gives students more flexibility, and not miss class material if they can’t physically be there.

Smith mentioned some of the consulting groups that have been analyzing tuition prices, student experience and issues like gender equality and Title IX. One of these groups, McKinsey & Company, has been the subject of controversy surrounding its role in the promotion of drugs like OxyContin. In 2021, McKinsey paid $600 million to settle the investigations into their role in the drug’s promotion with attorney generals across the United States.

A reporter for The Herald-Dispatch asked Smith about the controversy surrounding the firm, which Smith acknowledged.

“There absolutely is a scenario where they were consulting to a firm that at the end of the day has caused a problem,” Smith said. However, Smith believes the consulting firm has taken responsibility for its mistakes.

“They [McKinsey] have stepped up and said ‘you know what, whatever that process was that we contributed to, we thought we had the right answer and we were wrong and we’re taking care of it,'” Smith said.