Mens Basketball Win in Opening Round Against FIU 74-62 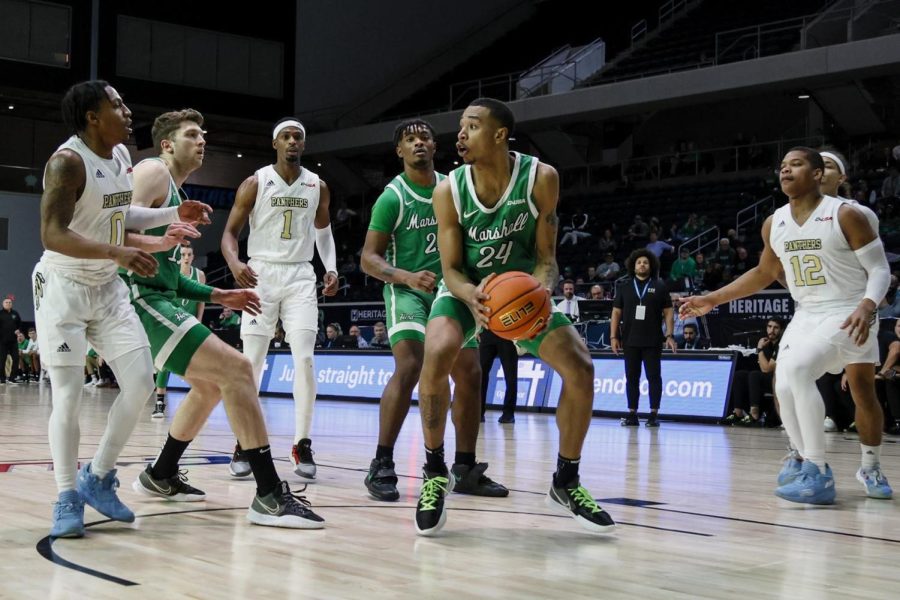 Marshall men’s basketball survives and advances beyond the first round of the Conference USA Tournament, defeating the FIU Panthers.

One of the biggest factors in Marshall’s first-round win was a dominant offensive performance in the first 10 minutes of the ballgame, where Marshall led by 11 points.

Head Coach Dan D’Antoni said that the biggest factor in playing in tournament games is getting off to strong performances like Marshall did tonight. “When you come out into a tournament, starting good is always important. Confidence plays a big factor in tournaments, probably more so than regular-season games. I was happy with the way we started until we gave it back.”

In the remaining minutes of the first half, the Panthers clawed back from the early double-digit deficit to make the game a single-digit margin at halftime as the Thundering Herd led by four points. In the first half of the ballgame, Marshall shot 43% in comparison to FIU, which shot 32% from the field.

At the start of the second half, Marshall’s offense struggled to get points on the board from beyond the free-throw line. Marshall went on an over three-minute field goal drought, which was broken by guard Taevion Kinsey whose three-pointer with 15:49 remaining brought the game into double-digits.

Midway through the second half, Marshall and FIU were trading baskets; however, with approximately 12:30 remaining in the half, Marshall got two big three-pointers from Andrew Taylor and Darius George to stretch the lead into double digits.

However, as FIU was trying to make a final push to come back and defeat Marshall, however, it would not be enough as the Thundering Herd defeated the FIU Panthers by a final score of 74-62.

After the ballgame, Marshall guard Taevion Kinsey addressed how the Herd played with more intensity in the third meeting, “I think this game, we were like he said mentally locked in, and we would play with more energy. And we kept that in mind that they beat us twice. But when you go into the tournament, everybody’s record is 0-0.”

Marshall is back in action tomorrow against Louisiana Tech. Tipoff from Frisco, Texas, is scheduled for 7 p.m. eastern and six central and broadcast on ESPN+.