STATE OF THE CITY 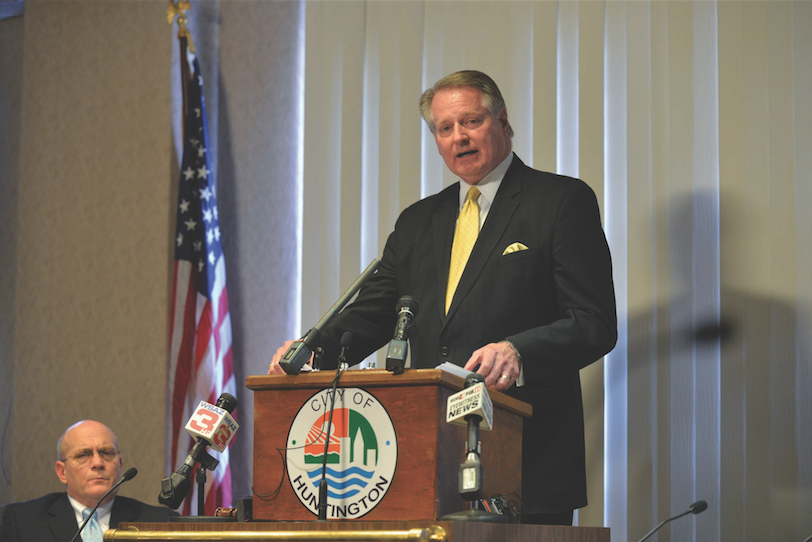 Huntington Mayor Steve Williams said he plans to improve infrastructure this year and praised the successful programs and progressions of 2014 Tuesday during the State of the City address.

“While we have done a lot [in the past year], we have yet to determine how we expect to address the challenges of our crumbling infrastructure,” Williams said.

Williams said efforts to assert support in the infrastructure will be supplied by long-term capital improvement and by approaching old issues with fresh solutions.

“We have four unique projects that are being combined into one effort,” Williams said. “Each project represents different neighborhoods with distinctly different challenges and opportunities.”

Project areas include the Hal Greer Boulevard corridor, portions of the West End of Huntington, The Brownfield Industrial area east of Marshall University, and a proposal to deploy high-speed broadband for the first economic expansion since the 1940s.

Williams said a partnership with the owners of Superior Marine, who possess identical principals as Huntington Marine, will redevelop Harris Riverfront Park.

Williams said the city seeks to bring commerce to the opposite side of the floodwall by developing a state-of-the-art 260-slip marina, dry dock facilities for 260 boats, a boat repair shop, a boardwalk, splash park and RV riverside camping facilities.

Williams added the city cannot progress until all citizens are willing to jump onboard.

“Unfortunately, we don’t have all hands on deck,” Williams said. “The single-largest issue we are facing is the level of addiction in our community. We have chronicled all that we are doing to address the drug issue.”

Williams said the level of addiction is hindering the city from achieving the heights it is capable of accomplishing and destroying neighborhoods and Huntington families.

“I have said before that we cannot arrest our way out of this,” Williams said. “We will continue our aggressive pursuit of every dealer who dares step foot in our city.”

Williams said the Mayor’s Office of Drug Control, led by Jim Johnson with assistance from Huntington Fire Capt. Jan Rader and Scott Lemley, crime intelligence analyst for the Huntington Police Department, is conducting meetings to assess the next steps.

Eighty-seven overdoses were reported in Huntington in 2014 with 12 resulting in death. The average age of overdose is 34 with the youngest victim being a 13-year-old female.

“We missed 87 opportunities to save a person’s life,” Williams said.

Williams shone a spotlight on local high school and college students and said the city lost insight when those in power turned a deaf ear to students.

“I’ve had opportunities to meet with the youngest of our citizens as I have visited our schools,” Williams said. “I always leave invigorated and impressed at their passion, intellect, ingenuity and incredible patience.”

The mayor said he was particularly impressed by the work of Brianna Jarvis, sophomore art major at Marshall.

“Brianna’s [bison competition] proposal was the most fascinating, detailed presentation I have observed in my professional life,” Williams said. “…I was amazed at the professionalism and mastery demonstrated by a then college freshman.”

Williams said events in Ferguson, Cleveland, and New York City ignited a lingering spark in the city’s powder keg to work toward bridging the divide between Huntington’s law enforcement and the black community.

Williams’ efforts to include representation of the lesbian, gay, bisexual and transgender community formed the city’s LGBT Advisory Council and created a liaison between the mayor’s office, the police chief and fire chief.

“We do not have the time or luxury, nor should we ever be inclined, to exclude anyone from the table of community affairs and field of mutual ambition,” Williams said. “We need all hands on deck.”

Williams said in conclusion the city is on the brink of delving into a multitude of opportunities.

“It’s been a long time coming,” Williams said, “but change has finally come.”