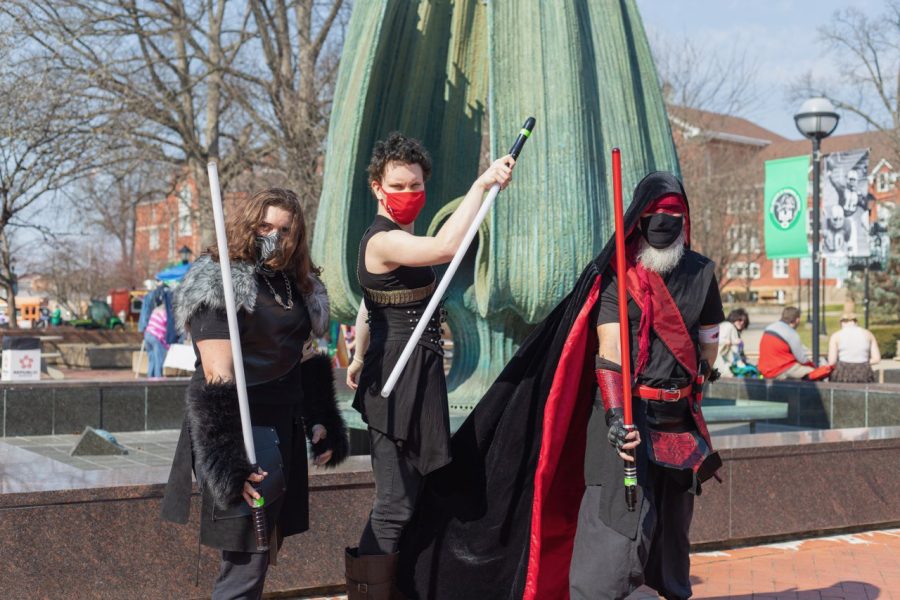 Students on a campus far far away are prepared for anything that might get in their way.

There are not many peaceful days when you can walk around in a suit of armor. Even

then, there is likely only one day when it comes across as completely normal to be fully clad in a suit of Mandalorian armor made entirely from recycled Dr. Pepper cans. The power to conjure that kind of day is exclusively reserved for HerdCon.

Marshall University Libraries hosted HerdCon—its annual pop culture convention—for the first time since the beginning of the pandemic last weekend. The event drew dozens of vendors, student groups and fandoms from throughout the tri-state.

While vendor numbers were kept low for the purpose of safety, tons of art, HerdCon displayed handcrafted apparel, merchandise and even a table of hand-made Lego mini-figures for its attendees.

“We love events that bring out creativity,” said Heather Brooks, a member of the HerdCon committee. “That is what a popular comic convention is about. You can see any character you imagine. Whether you are into gaming, science fiction or comics—everything is represented here.”

HerdCon provides a chance for likeminded communities to become intertwined. Clubs on campus such as Cherry Blossom Cosplay, the Marshall University Game Design Guild, the Esports Club Association and even the Fencing Club can come together and find students who share overlapping passions, which can lead to potential new recruits for every club.

HerdCon also serves as a chance for the community to bring their interests, even if they do not attend Marshall.

“It’s not all cosplay and sci-fi,” Salem Dick, a local middle school student attending HerdCon as their first convention, said. “There were a bunch of people just hanging out.”

HerdCon looks to continue expanding as years go on and safety measures can slowly be removed.

“What we would love to have is more student input,” Brooks said. “We want students to be involved. The last two t- shirts were student artwork. We want to represent what the student population wants from a con.