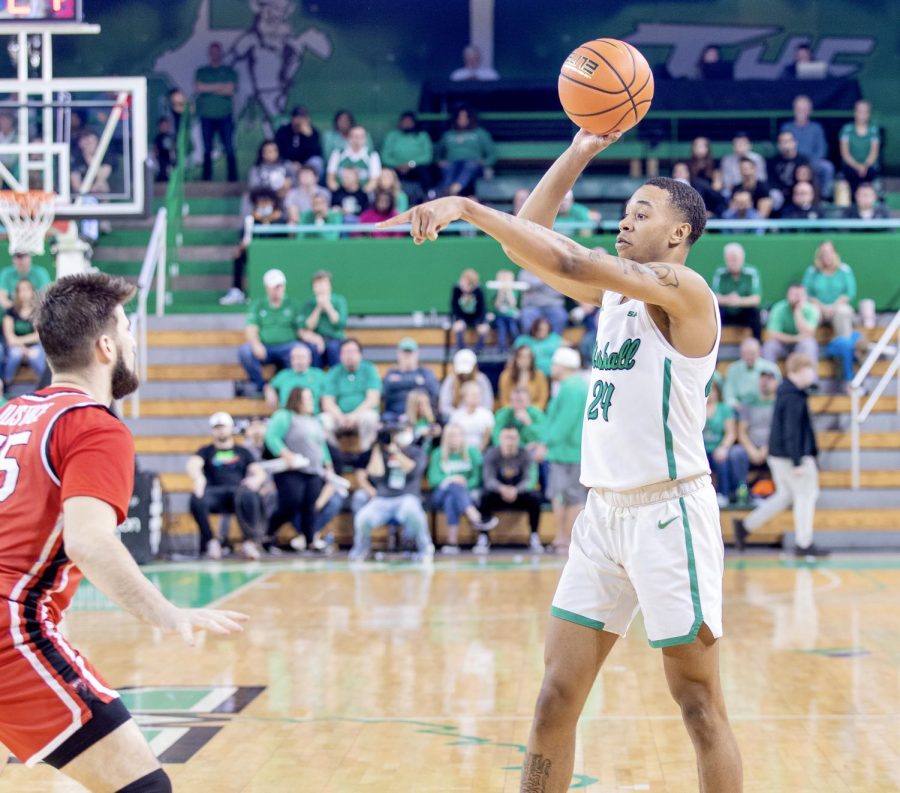 The Marshall Thundering Herd, before the start of Wednesday’s night game, honored seniors Mikel Beyers, Darius George, and Taevion Kinsey with a pregame ceremony. However, at night ends, the Western Kentucky University Hilltoppers left the Cam Henderson Center victorious by a final score of 86-72.

In the first five minutes of the game, it was an offensive battle between the Thundering Herd and the Hilltoppers trading baskets. However, the Hilltoppers were able to pull away with the lead in the first half when the team made an adjustment to a 2-3 matchup zone.

Marshall, after the defensive adjustment, was flustered for the remainder of the first half and not able to generate much offense.

In the first five minutes, Marshall generated 16 points in the first minutes of the half; in the remaining 15 minutes, the Herd scored 12 points for 28 points at halftime. Marshall trailed 15 at halftime.

Marshall came out of the halftime break on a run trimming the deficit to at the most 12. The game’s margin would be in single digits with 13:54 remaining with a free throw from Taevion Kinsey.

However, Marshall’s chances in striking distance did not last long as the game was in the waning minutes; the Hilltoppers would pull away in the final minutes to secure their third consecutive win in Huntington.

Marshall guard Taevion Kinsey talked about how the Thundering Herd looked like a winning ball club in the first few minutes of the game. “I thought we came out strong, we looked like a winning team when we came out. And then we kind of, I felt like we kind of played into their favor. You know, we took a lot of, I don’t want to say we took a lot of threes, like, it was too many.”

Head coach Dan D’Antoni talked about how Marshall’s struggles came with regard to discipline. “It’s just us, uncharacteristically or for whatever reason, not uncharacteristically, but for whatever reason, we’re not disciplined enough to stay in our, in what we do. And they took advantage of it, which they’re going to they’re good ballclub they’ve been playing well, and they took advantage of it.”

Marshall finishes the regular season against Western Kentucky in Bowling Green, Saturday with tipoff at 3, and the game will be broadcast on ESPN+.