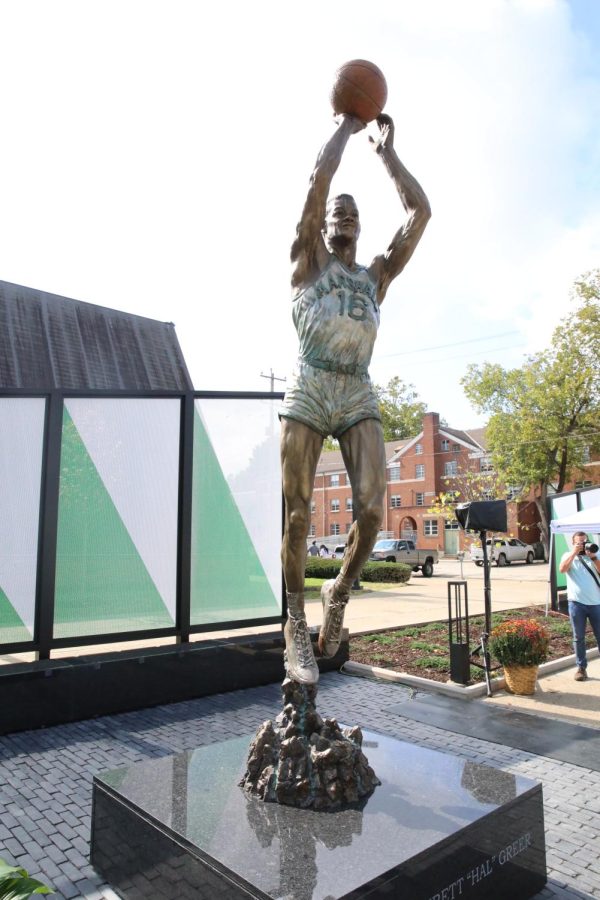 To celebrate the life of athlete Harold Everett “Hal” Greer, Marshall University held a ceremony Oct. 9 to unveil a bronze statue of the athlete on the corner of 3rd Ave. and 18th St. in Huntington.

The statue, created by Huntington Native and Marshall graduate Frederick Hightower Sr., is a nearly eight-foot-tall bronze figure of Greer in his number 16 Marshall jersey.

“When people are driving by they are not just driving by any school, but that this is Marshall—a place of champions,” Hightower said. “Hal was a native of Huntington, I think that speaks well for our community and that we could produce such a great individual.”

Greer played basketball at Marshall from 1954-58, where he averaged 19.4 points and 10.8 rebounds per game in three varsity seasons—leading Marshall to the school’s first appearance in the NCAA men’s basketball tournament in 1956. Greer was named an All-American Honorable Mention in 1958 and later inducted him into the Athletic Hall of Fame in 1985.

“This is really a dream come true for me and I am thankful that I’ve got to see this happen before I step away as president” President Jerome Gilbert, said. “Until now, we [Marshall] have not sufficiently recognized Hal Greer at Marshall University. Today we are creating an opportunity to recognize Hal and give him the respect that he should have.”

Greer was also, in 1955, the first Black student-athlete to play baseball in at a traditionally white university in West Virginia.

After Marshall, Greer was selected in the 1958 NBA Draft by the Syracuse Nationals—the Philadelphia 76ers today. In 1982, he was inducted into the Naismith Memorial Basketball Hall of Fame and in 1996, was listed as one of the 50 Greatest Players in NBA History.

“And to think that he came from the streets of Huntington, the streets of Fairfield, campus of Marshall, state of West Virginia; it gives us all a chance to say that we can rise to the best. I want all of you to celebrate that.” Dan D’Antoni, Marshall head men’s basketball coach, said. “From this campus—anything is possible.”

After Hightower was commissioned by Marshall in 2018, the original ceremony was scheduled in October 2020, but COVID-19 caused a delay at the foundry. The statue shows Greer shooting in his signature one-handed jump shot and a flow of green at the bottom.

“Somebody wanted to know what was the green [at the bottom] and I was like ‘well you have to go to Marshall understand that because we bleed green,’” said Hightower.

Greer’s two daughters and brother-in-law spoke on behalf of Greer’s wife and son who were delayed by travel issues.

“I am so impressed with the details and how everything is so life-like. If my dad was here, I think he would want to just take the statue home. He adores the fans and appreciates everything,” Kelly Denise, oldest of the three siblings, said. “I would say the greatest thing he has taught me is to ‘love what you do’ and ‘don’t focus on anything else and be the best at what you love.’”

Greer’s jersey numbers 16 and 15 for both Marshall and the 76ers were retired, respectively, in his honor. Commemorative Hal Greer jerseys are now available at Marshall University Bookstore for a limited time.