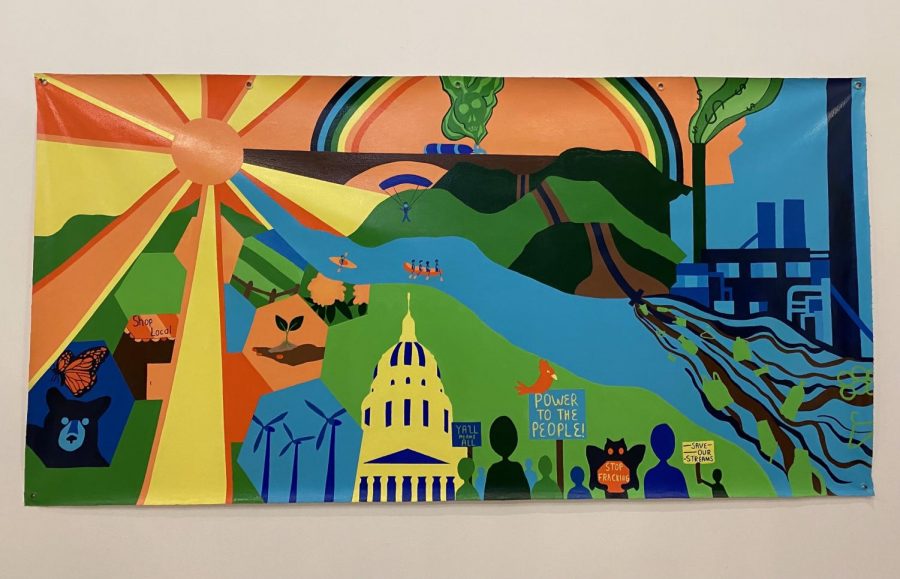 After receiving a grant, the sustainability club has designed a mural to illustrate the impact of fracked gas and the petrochemical industry in West Virginia.

“The ugly truth is that West Virginia runs deep with stereotypes, oppression, pollution, high health risks and more, and all of that has been brought in by the fossil fuel industry,” sustainability club president, Baleigh Epperly, said. “Just because the ugly exists, it does not mean there’s not plenty of beauty around here. We are capable of growing and expanding beyond anything we have ever been told we deserve.”

The Global Alliance for Incinerator Alternatives (GAIA) awarded the club a $1000 grant in December 2020.

The sustainability mural will be located on the first floor of the Visual Arts Center until Sept. 30, and was created by Epperly, eight current members, Marshall alumnae and former vice president Abi Taylor. Using acrylic paint on a canvas roll, the club finished the mural in five weeks.

Epperly said the club decided to design the mural as a visual book—making the viewer read from the left side to the right.

The left side represents the positive aspects of the state, the middle shows the struggles, and the right is the negative effects caused by the industry.

With potential feedback from a piece that is open to the public, Epperly said she will not be bothered if people find the mural controversial or problematic.

“The members of the sustainability club understand the concerns of fossil fuel industry workers, they are hardworking folks who deserve good pay, proper healthcare and the right to work to provide for their families,” Epperly said. “Our enemy is not the worker, it is the corporations that have bought and paid for our state and have become extremely rich using West Virginia’s people as a labor force to do the hard and dangerous work.”

The bright color palette continues throughout the different ideas included in the mural.

The left side starts with the sun shining over the mountains, which merges into a honeycomb of different aspects of West Virginia.

To represent the state’s wildlife, inside the honeycomb is a black bear, monarch butterfly and rhododendron. The club also included the “shop local” movement and wind turbines to represent the growing renewable energy sector.

A river that flows out of the sun represents the state’s tourism with a kayak and a raft going towards toxic pollution in the water.

Jamie Platt, gallery director, said the mural is an example of protest art and reminds the audience of the message.

“Protest art, when it’s good, does its work in a way that draws the viewer in and holds them long enough to communicate its message,” Platt said. “It is difficult to do well. Sometimes protest art collapses visually under the weight of its message.”

The mural also illustrates a tanker on the bridge to show the emissions of chemicals, a pipeline that carries fracked gas and a facility that hosts a smokestack emitting pollution—with added dollar signs flowing out to represent money generated from these facilities.

“For decades, extraction industries have plundered our land and left our people sick and impoverished in the name of economic prosperity,” Epperly said. “We, as West Virginia youth, demand a better future where we do not feel like we have to leave our homes to create a meaningful life and do not fear for our families’ safety and health.”

The bottom of the mural is a protest at the state capital building to stop fracking and to save the streams.

“To me, the people gathered together rallying for their voices to be heard is a testament to our West Virginian ancestors who fought for their rights against the coal companies one hundred years ago famously known as the battle of Blair mountain,” Epperly said. “People of all backgrounds and ethnicities joined together to fight for labor rights in the biggest labor uprising in U.S. history right here in West Virginia.”

The sustainability club will be hosting a reception at 6 p.m., Thursday, Sept. 30 at the Visual Arts Venter.