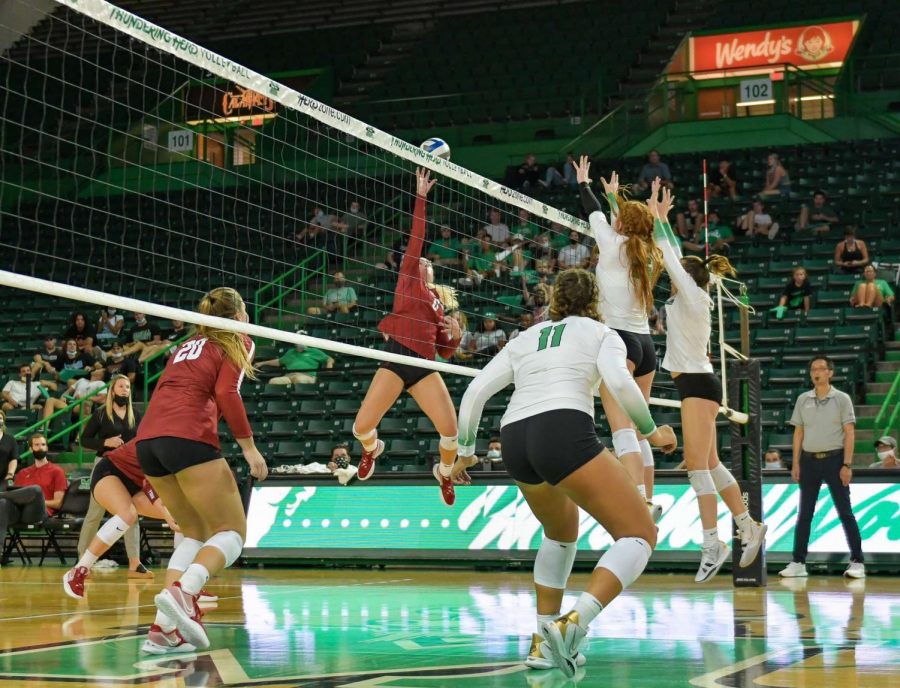 In front of the first home crowd at full capacity since fall 2019, the Marshall University volleyball team hosted the Thundering Herd Invitational, a round-robin format featuring Marshall, Alabama, Austin Peay and Miami (OH) this weekend. The invitational also served as the home opener for Marshall, a lone set of home games before a long road trip lasting until October. The invitational served as the first of its kind under Marshall volleyball head coach Ari Aganus.

“We mixed up a lot of different lineups and were so excited about the versatility of this group,” said coach Aganus. “I’m so proud of our entire unit.”

The Herd began its weekend against the Alabama Crimson Tide, an SEC non-conference opponent. Senior Macy McElhaney led the Herd in kills with 16, while junior transfer Lydia Montague recorded 10 kills, four service aces, and two blocks in her first game in a herd uniform. Ciara Debell also recorded her first double-double of the season with 14 kills and 14 digs. While the Herd won the first set 27-25, the Crimson Tide won three consecutive sets, taking the match 3-1. For Alabama, Abby Marjama and Kendyl Reaugh combined for 30 of the Tide’s 56 kills.

On Saturday, the Herd returned to the floor with a vengeance, taking two sets against Austin Peay in the first of two matches. While the Governors would take the third set, the Herd would continue to dominate, winning the fourth set 25-16 to take the match 3-1. Overall, Marshall outscored Austin Peay 100-88. Graduate Ciara Debell led Marshall with 15 kills and 13 digs, leading to her second double-double of the weekend. Three players would put up double digits for Austin Peay, but it would not be enough.

In the final match of the invitational, Marshall and the Miami Redhawks would battle to the last set. The Herd would take the first set 25-22, despite four lead changes, thanks to a kill by McElhaney. Following the first set, the Redhawks would take two consecutive sets, commanding a 2-1 lead. The Herd then rattled off two consecutive winning sets, outscoring Miami 40-25 in the final two frames. Four players would tally 10 or more kills for the Herd, and Ciara DeBell would take home her third double-double in three straight appearances.

“The resilience we showed was a huge growing point for our program,” Coach Aganus said.

With the win against Miami, Coach Aganus has now recorded 30 wins in her career with the Thundering Herd. While Marshall will return to the court on Sept. 3 with a trip to the Wright State Invitational, the Herd will not return to the Cam Henderson Center until Oct. 1, when it takes on Middle Tennessee.