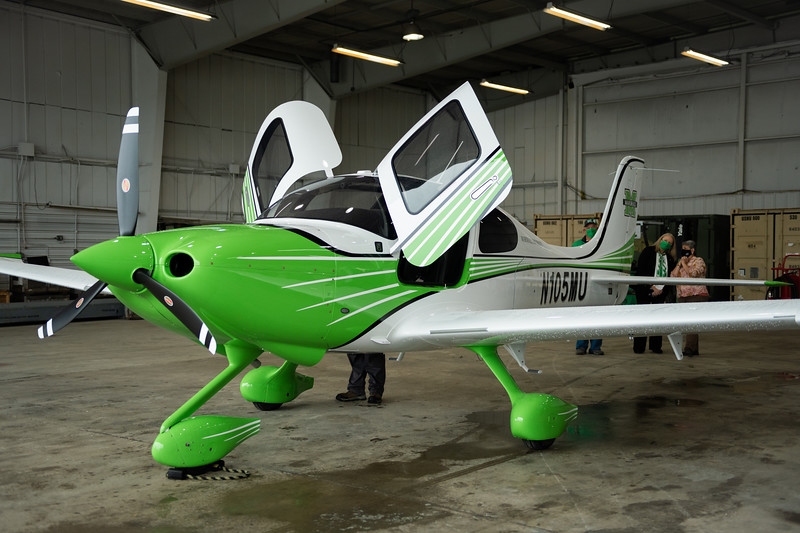 The first plane was delivered to Yeager Airport, home of the Bill Noe Flight Shool Training Facility, on October 29, 2020.

The Kelly green, M-shaped library was created from an idea by Dr. Kelli Johnson, associate university librarian at Marshall.

“I was traveling, pre-COVID, and spotted a “take one–leave one” book cart at the San Diego airport,” Johnson said. “As a librarian, I was so excited that the airport was encourag- ing literacy and reading. When Marshall announced the aviation program, I felt like it was perfect timing to once again showcase how Marshall University is committed to education and empowerment of the people of West Virginia. I wanted to show that learning has no boundaries.”

The library was created by students in Bret Masters’ building technology class at the CCCTC. Johnson said it was Johnny Bradley, supervisor of library operations at Marshall, who suggested reaching out to Masters in hopes he would be willing to take on the build with his class.

“I would like to say I love a challenge,” Masters said. “This project would be a challenge in itself with the designing, cutting of angles and the construction. However, this past year with everything going on, it has pushed the challenge to a whole different level.”

“Working together through problems and difficulties has been the West Virginia way,” Masters said. “This bookcase project has exemplified that through the cooperation of everyone involved. When the goal is to educate young students and the people in your community,

you need a team. This team effort with Marshall University, LittleFreeLibrary.org and the Building Technology students has strengthened our community.”

“Collaborating with each of these groups to bring a Little Free Library to Yeager Airport was an amazing effort that allowed us to show off some talent, school spirit and a collective commitment to promote reading in the community,” said Monica Brooks, associate vice president for online learning and dean of libraries.

The new library at CRW is in the process of being registered as an official Little Free Library. Once the charter sign arrives and is installed, the library will be included on the world map of all registered LFLs.

“As the steward for two local Little Free Libraries, I was very familiar with the LFL program and thought these would make great additions to the LFL world map,” Johnson added.

In addition to promoting literacy by providing books to guests traveling through Yeager Airport, the library will also provide information about Marshall University and the degree programs offered through Marshall’s new Division of Aviation.

“We pride ourselves at CRW on being a family-friendly airport,” said Yeager Airport Director and CEO Nick Keller. “Having a Little Free Library at Yeager Airport is another great opportunity for families to pass the time while waiting for their flight.”

“This is another great opportunity for CRW to team up with Marshall University,” Keller continued. “The stu- dents at the Cabell County Career Center did a wonderful job building the Little Free Library, and we are proud to have it here at Yeager Airport.”

Marshall President Jerome A. Gilbert stopped by to see the new library in place at Yeager Airport and to help stock the shelves with a personal donation of books.

Patrons are encouraged to give to and take from the Little Free Library while visiting Yeager Airport. The LFL will be maintained by Marshall University Libraries. Anyone wishing to make a book donation should contact Johnson at [email protected] or 304-696-6567.

A second Marshall-themed LFL is being built for the Huntington Tri-State Airport. Masters says they hope to have it completed and installed this winter.

Isabella Robinson can be contacted at [email protected]