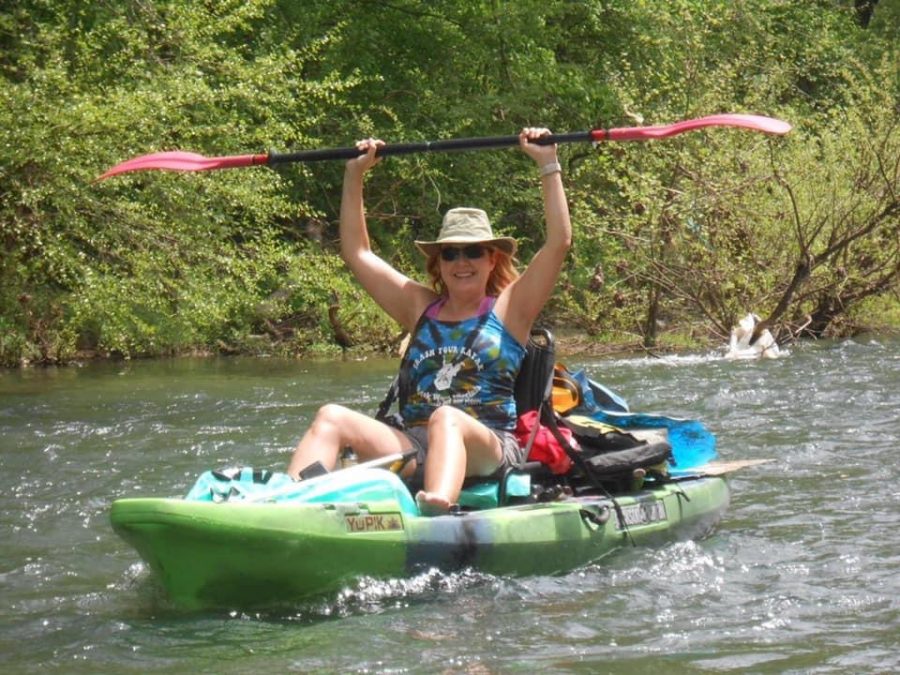 As a co-founder, Martin received the Power of Performance Award in 2020 at the Small Communities, Big Solutions Conference in South Charleston. She was recognized as someone who is “revitalizing communities” in West Virginia. | Michelle Martin

The summer day couldn’t be better as you are flowing down the Little Coal River in Danville, West Virginia. The sun is shining bright on you in the perfect 87-degree temperature, closing your eyes to feel the heat even if you could look at the blue sky all day long. It is your first time in a year bringing your kayak out, the one collecting dust in the shed. West Virginians and tourists from miles away are in the river with their Jon boats and kayaks to experience one of the state’s outdoor treasures. It is quiet as can be, except for the occasional bird chirps, as you breathe in the fresh air and take a drink from your hydro-flask when you suddenly go under. A 200-pound tire just hit the stern of your kayak. People around you gasp and try to help, when suddenly they realize they are trapped with a hundred more tires ahead of them.

If you are floating in the West Virginia rivers, you may just pass these tires and would not think about them later—if you are a member of the ‘Trash your Kayak Cleaning Crew’ Facebook group, you would be gathering those tires and pulling them onto land.

With the help of volunteers and community programs, the cleaning crew has removed over 3000 tires and 3.5 tons of trash from West Virginia rivers since the group was created in March 2016. The first crew clean-up gathered 800 tires with help from the Department of Environmental Protection (DEP) and the Rehabilitation Environmental Action Plan (REAP).

“It is extremely frustrating as tourism is one of our biggest draws to the state,” Michelle Martin, group co-founder, said. “West Virginia is getting a lot of dollars from tourism; I hope they start to spend more time cleaning up our environment and rivers.” Martin said that most of the time the group has to leave hundreds of tires due to lack of space.

Martin was another frequent kayaker who did not know how many tires were in the rivers. When she and her sister, Melissa Haddix, noticed the tires in the Littler Coal River, they both decided to create the group.

Martin said that she was told by numerous sources that the tire problem began in the 80s in the West Virginia rivers to “be somebody else’s problem and was a convenient way for businesses and people to get rid of their tires.” Throwing out tires in the river was and still is a popular choice because of the West Virginia tire disposal fee—roughly 3-5 dollars per tire or 20 dollars for all four.

The group gathered 167 tires and 5.92 tons of solid waste from a 1.5 mile stretch of the Little Coal River during their most recent clean-up event on May 22. The crew gathered the tires and trash in 4 hours with 55-60 volunteers, but only 18-20 members were in the water with 8 boats.

Group members post frequently about how many tires they have collected at events or on their own—often comparing to other members or to inspire people to participate—but each tire is different according to their style or age. Martin said some tires that she has found are from the 50’s and can weigh a couple hundred pounds. She said a large AEP boom truck struggles to pull out some of the tires that the crew finds.

The crew still works with the DEP and REAP, but has also received help from the AEP, Little Coal River Branch and the West Virginia communities of Danville, Madison, and Julian.

Members are also from different towns in West Virginia and vary from toddlers picking up trash on land to women at the age of 70.

Most members are there to see the river clean and volunteer, but some members are there for the things they can find too. 65-year-old Sheldon Jacobs is a member that regularly documents these adventures with the group and when he kayaks alone. Jacobs said he joined the group 3 years ago when he wanted to kayak with other people, or what he says are other “scarfs.”

“I have always been a scarf. If I see something in the river or on the side of the road and it is good, I am going to use it,” Jacobs said. “They scarf too, and they clean out the river. It is not work; it is fun.” Jacobs said if he can’t use something, he will save it for one of his kids—whether that is his own child, one of his three grandkids or two great-grand kids.

Urban dictionary describes “scarf up” as the action “to take (something) in a quick and eager way,” but Jacobs describes the word as, “You see something on the side of the road—let’s say it is a golf-club—and it looks like it is in good condition. You go and get it. It is an old term; you just pick it up where it is available without stealing. You just scarf it.”

Jacobs does just that—he scarfs. His finds include a propane tank in the river—only used once or twice—that he brought home and a brand-new board in the water that he was able to replace with his 28-year-old boards on his deck. But sometimes Jacobs finds things he can return, like 14 basketballs that he found in 2020 or seven neon-green softballs and three baseballs he found this may. He now brings the basketballs with him to give to children at parks and has returned the softballs to the local field.

“What we [Trash your Kayak Cleaning Crew] are doing now is not for me. It is for the kids,” Jacob said. “We can leave this world totally screwed up or if everybody would just do one thing—clean up your own damn mess.”

Members of the crew also bring home items if it is not considered trash—Martin said she has collected over 50 aluminum pop caps from the 50s and 60s and has pulled out a jacuzzi tub and a vintage bowling pin.

The crew will be trashing their kayaks on June 5 at the Big Coal River and Martin is currently organizing an event for Sept. 11 on the Elk River for the trail foundation. She said that people need to start cleaning the West Virginia rivers, even if it is not during a clean-up event.

“We have thousands of people every weekend kayaking our West Virginia rivers, because most of our rivers are only accessible through a kayak or canoe. Just pick up one thing, it could just be a Kroger bag. Imagine how much impact that can do,” Martin said.

Xena Bunton can be contacted at [email protected].