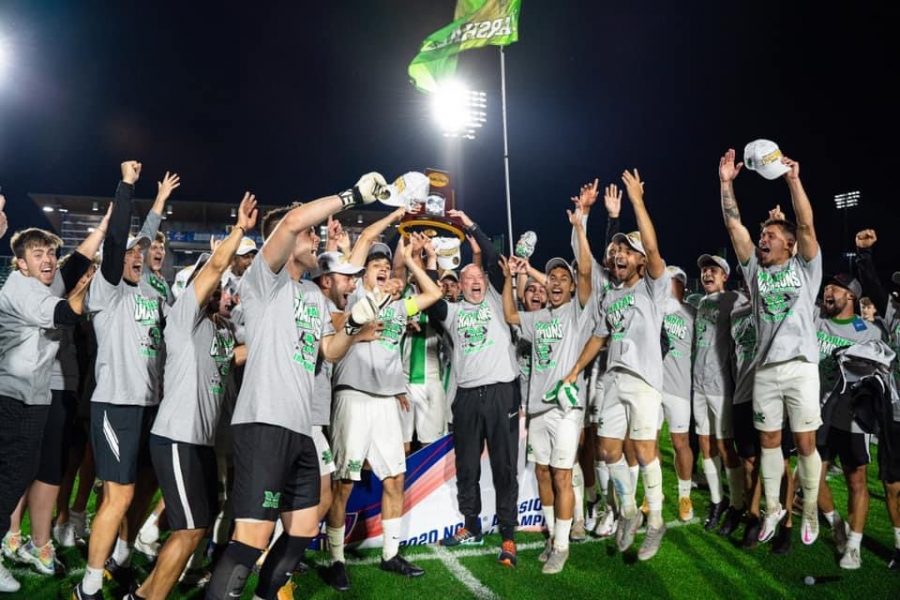 The game-winning goal was assisted by junior midfielder Vitor Dias and made by senior wing Jamil Roberts in the 1-0 victory. | Austin O'Connor (@oco_photo)

On Monday night, No. 10 Marshall scored the golden goal against No. 3 Indiana in overtime to become national champions for the first time in program history.

The goal was assisted by junior midfielder Vitor Dias and made by senior wing Jamil Roberts who scored the only goal of the game in a 1-0 victory.

Roberts said the game-winning goal was something familiar.

“Déjà vu,” Roberts said. “Vitor in the box does something that no other player on the pitch can do. The keeper makes a decent save and I’m there to tap it in. Luckily I’m in the right place at the right time and that’s what we train and you know I make that run 20-30 times in the game but it only takes one time for the ball to drop.”

Marshall ended the season with three straight 1-0 victories and Roberts was the one who scored all three game-winners during that stretch.

In its final game of the season, the Herd controlled the tempo while continuously testing Indiana’s sophomore goalkeeper, Roman Celentano.

Celentano had seven saves in the game as Marshall took 17 shots in total.

The Hoosiers only took eight shots in the game and Marshall’s junior goalkeeper Oliver Semmle only had one save which came in the second period.

The Herd kept the pressure on the Hoosiers until they emerged victorious at the 97:08 mark.

Head coach Chris Grassie said this is a moment worth remembering.

“Immensely, immensely proud to be a part of this team,” Grassie said. “We all really kind of came together this season and we just got better and better and better. We had some bumps in the road. There are definitely a couple of teams tonight that will be happy they beat a national champion. But, we continued to learn from each lesson and each set back.”

On top of the Herd’s efforts in winning the NCAA College Cup final, Marshall fans showed up to tailgates in large numbers.

Grassie said that the fans’ support was a big reason why the men’s soccer team ended up winning the national championship game.