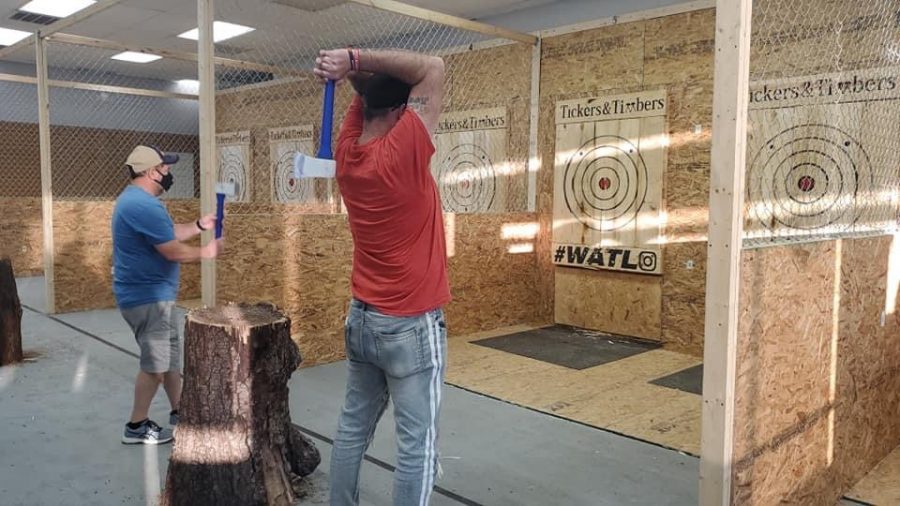 Local entertainment center Tickers and Timbers, known for its axe-throwing booths and escape rooms, is preparing for new events and additions to the business, including spring and summer axe-throwing leagues and a blacklight “paint splatter” room.

Local entertainment center Tickers and Timbers, known for its axe-throwing booths and escape rooms, is preparing for new events and additions to the business, including spring and summer axe-throwing leagues and a blacklight “paint splatter” room.

“A lot of venues like this have axes for fun,” Perry said. “We also do this, of course, but people who are interested in axe-throwing as a competitive sport can join our league. Our spring league just started, and our summer league is a few weeks away.”

Perry said she had the idea to create the entertainment center after the pandemic affected her 18-year career as a therapist. She said she and co-owner Jerry Lawson noticed the Huntington and Barboursville areas needed something recreational and different from what other local businesses offered; therefore, the two decided to build Tickers and Timbers.

“I’m a single mom, and I had to find something else,” Perry said. “I live here, and so does the other owner, and we always said there was nothing to do here, so we created this facility, and there’s more we want to do with it.”

Perry said the business features two escape room options for guests: an Area 51-themed room and a “Mothman Mystery” room. Perry said the Mothman room was her idea, and Lawson built the room after she designed it.

Perry said while the pandemic may have discouraged business when it first opened, it has grown in popularity.

“Business was slow to start,” Perry said. “We opened on Black Friday, and with COVID, we didn’t get much business, but each week we keep increasing. Last weekend we were sold out, our escape rooms and our axes. We’re usually booked completely on the weekend.”

Perry said she and Lawson encourage guests to come during the week when the business is less busy. Perry said they offer a special on Thursdays of $20 per person for the axe-throwing booths or escape rooms to promote visiting on a weekday.

Perry said she hopes to expand the business to become a full recreational facility. She hopes to open the “paint splatter” room within the next week or two, where guests splatter neon paint in a room lit by blacklights. They will partially use the room for events like gender reveal parties.

Perry said she also wants to add a “party room” for birthday parties for guests ages six and older. Perry said children must be 12 years or older to throw axes, but only six years or older for the escape rooms so that families can enjoy themselves together.

Madison Perdue can be contacted at [email protected]