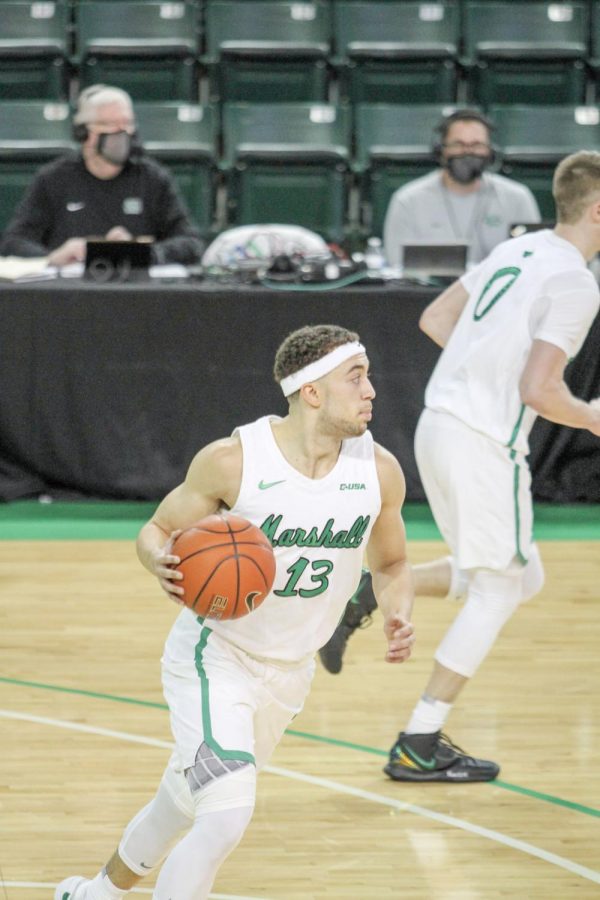 Jarrod West brings the ball up the court against North Texas Friday, Feb. 26 in one of his final appearances in the Cam Henderson Center. West injured his ankle in the contest, missing the following day’s game - the only missed game of his career.

Announcing his decision Wednesday afternoon — Jarrod West will be moving on from Marshall to play his final year of eligibility at one of three schools: Louisville, Ohio State or Pittsburgh. Wherever he plays during his fifth year, West will forever remain a legendary son of Marshall.

(Update: At 1:29 pm Wednesday, March 31, West announced his decision to commit to the University of Louisville).

As Marshall’s all-time steals leader, West’s accomplishments on the court easily support the above claim, but for me, West’s story at Marshall extends beyond statistics.

He is the epitome of a team player and leader. His effort and mentality garner respect from those around him, even his competitors.

As a freshman, he quickly gained that respect from head coach Dan D’Antoni and veteran players such as Jon Elmore and CJ Burks, starting 35 games and playing the third-most minutes per game behind only Elmore and Burks. That team camaraderie resulted in Marshall winning the 2018 Conference USA championship and upsetting Wichita State in the NCAA tournament.

Successfully stepping into that role does not come naturally to most college basketball players, but for West, his approach to the game allowed him to do just that.

That approach is centered around something he likes to call the “bulldog mentality,” which is a term that any devoted Marshall basketball fan should know by now.

Undoubtedly, that “bulldog mentality” is the basis as to why some of the best basketball programs in the country have given him looks and offers to be a part of their 2021-2022 teams.

In the 2020-2021 season, West’s playing style resulted in him leading C-USA in assists and steals per game, along with him earning a spot on the C-USA all-second team and all-defensive team. These accomplishments lend to his status as an all-time Marshall basketball great.

Personally, West will always be the first player I picture when I think of Marshall basketball because our respective experiences at Marshall spanned the same timeline, with us both arriving in the fall of 2017 and leaving in the spring of 2021.

During that time, West and I crossed paths a couple of times away from athletics. We met in an accounting class, and in that class, West exhibited why he is on the All-Conference USA All-Academic Team.

Near the end of the semester, a select few in the class were exempt from the final exam because they had achieved a high enough grade point average. Not only was he one of those few, but he also had the highest grade in the class. Perhaps the professor should not have said that, but he did.

That is just one of the countless examples of who Jarrod West is as a person. He is the model student-athlete, and more than anything else, he is one of the most cordial, respectful and sincere dudes you will ever meet.

Jarrod, we will miss you here at Marshall, but you can count on me and thousands of Herd faithful pulling for you wherever your next stop is.