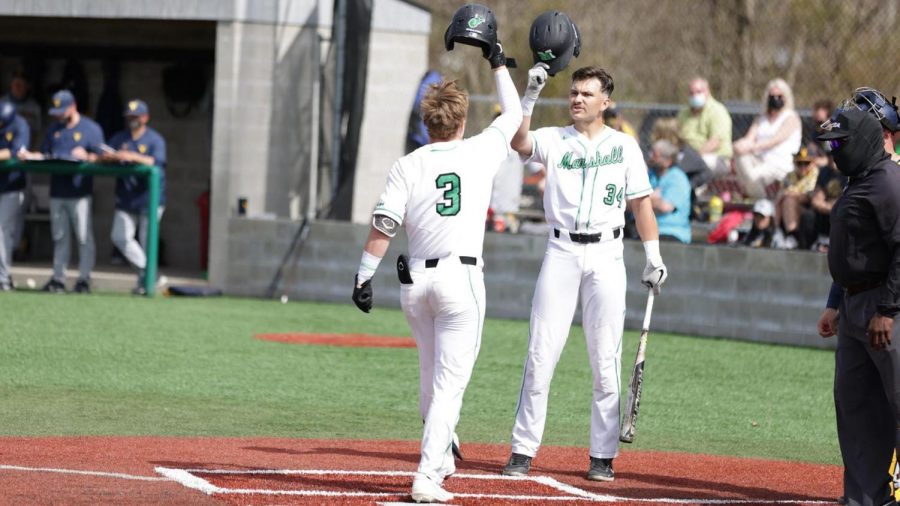 After his leadoff home run in the first inning, junior shortstop Geordon Blanton (3) is greeted at home plate by sophomore catcher Kyle Schaefer (34).

Dominating from start to finish, the Marshall University baseball team defeated West Virginia University 7-1 Tuesday in the Mountaineers first trip to Huntington since 1988.

“This team came out with a fire and an edge about them that they weren’t going to lose,” Marshall head coach Jeff Waggoner said. “The way we ran the bases; the way the pitchers tagged the zones; the approaches at the plate, that was just a fun team to be around today.”

The Thundering Herd got off to a quick start in the first inning. Sophomore pitcher Ryan Capuano pitched a 1-2-3 inning defensively in the top of the inning while junior shortstop Geordon Blanton hit a leadoff home run in the bottom of the first to take a 1-0 lead into the second – a lead that would never waiver.

In the third inning, the lead grew to 4-0 after sophomore catcher Kyle Schaefer hit a three-run homer over the right field fence.

Sophomore center fielder Luke Edwards used agile baserunning to score the Herd’s seventh and final run of the game in the fifth inning. He reached home all the way from second base on sophomore second baseman Travis Sankovich’s groundout to first base.

“The pitcher kept looking towards the outfield, and I sent him,” Waggoner said. “That’s just a hustle play… that’s the team I want to coach, and I think they want to be that team.”

Seven different pitchers saw action for Marshall, but Capuano pitched the most, at 3.1 innings. He also earned the most strikeouts, two, and the win.

Waggoner says that his team was finally able to play with an edge, an attribute that his team will need “in order to be successful” heading into conference play.

“I believe in this team,” Waggoner said. “You’ve got to be mentally tuff; you’ve got to stay positive and keep grinding it out. Hopefully, this will get us going.”