Men’s soccer stepping out of conference Wednesday against WVU 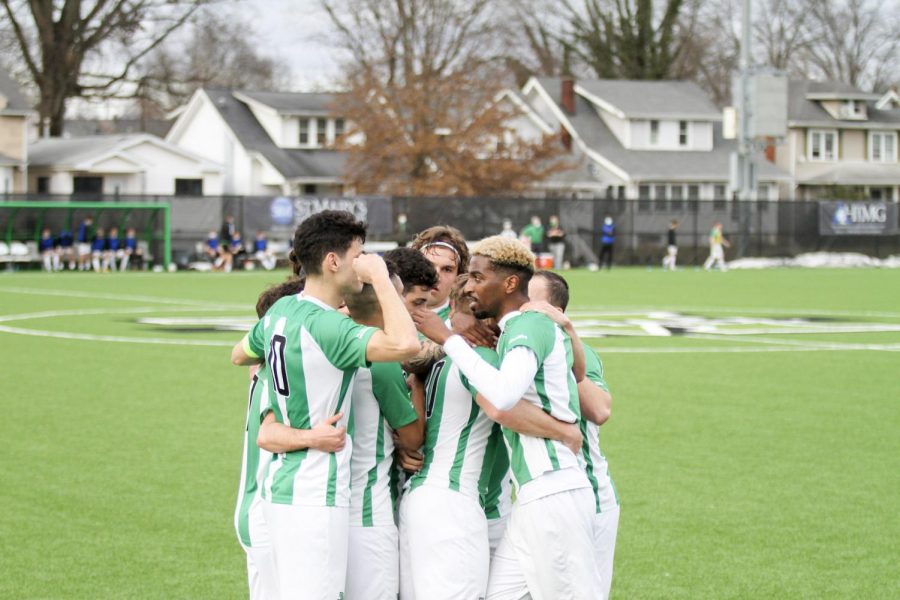 Members of the Marshall men’s soccer team huddle up during a match with Bowling Green on Feb. 27.

After three-straight conference games, the No. 8 Marshall men’s soccer team (6-1-1) will divert out of conference Wednesday for a meeting with the West Virginia Mountaineers (3-2) in Morgantown.

The Thundering Herd and Mountaineers have only met twice all-time on the pitch. After a 2007 loss in Morgantown, the Herd evened the all-time series last season in Huntington with a 2-1 victory in the first round of the NCAA tournament.

West Virginia, who plays soccer in the Mid-American Conference, fell 1-0 to Bowling Green on Wednesday, March 17, a team Marshall defeated 1-0 on Saturday, Feb. 27.

While the Mountaineers are third in its conference, Marshall is tied for first with Charlotte, who WVU defeated 3-0 on Friday, Feb. 26.

With 2.38 goals per game, Marshall averages 1.18 more than WVU. The Herd also shoots it at a much higher pace, 18.4 shots per game compared to 8.0. The Mountaineers are more accurate with its shots, however, shooting 52.5% of its shots on goal compared to Marshall’s 44.2%.

Defensively, Marshall leads most categories, allowing less shots per game and a lower percentage of those shots on goal.

Individually,  junior forward Tony Pineda leads the Mountaineers in shots on goal, with four, and his two goals are tied with redshirt freshman Bjarne Thiesen for the team lead.

Leading the way for Marshall in goals scored, junior Vitor Dias has six, double that of junior Jan-Erik Leinhos.

Junior Vinicius Fernandes scored the game-winning goal against Kentucky Thursday, his second of the season.

With the victory over Kentucky, Marshall earned its sixth win over a ranked team in the coach Chris Grassie era. Ranked at No. 11, the Wildcats were also tied for the highest-ranked team the Herd have beaten in school history.

Coming off a victory of its own against SIU Edwardsville, West Virginia moved to 2-2 in the MAC, and after its matchup with the Herd, the Mountaineers will return to conference play for its final six games.

Marshall will return to conference play on Saturday against Old Dominion at Hoops Family Field and will wrap up the regular season with three more conference games afterward, closing out the season at home against Charlotte.

But before focusing on the final four conference games, Marshall is keyed in on WVU. The matchup will take place at Dick Dlesk Soccer Stadium at 7 p.m. Wednesday.