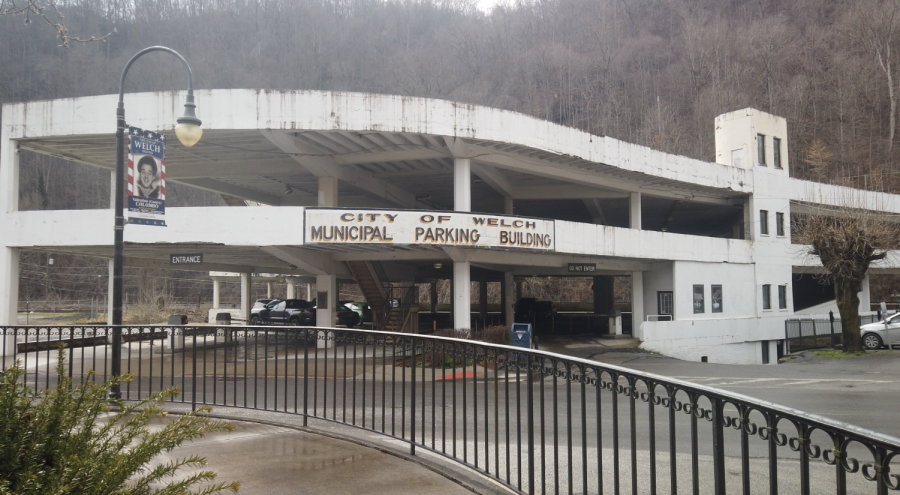 The Welch Municipal Parking Garage is the oldest publicly owned parking garage in the U.S.

WELCH, W.Va — McDowell County is usually known for two things, the high rate of drug overdoses and opioid addiction, and the fact that the county had one of the single highest margins of victory for former President Donald Trump in the 2016 Presidential Election.

This large shadow of McDowell County is only present in the mind of outsiders and is met with eye rolls when brought up in conversation.

“I feel like McDowell County is finally getting some better coverage,” Derek Tyson, an editor at The Welch News, said.

In a rebuttal to the comment, Melissa Nester, owner of the newspaper, said, “But that’s you pushing that coverage, Derek,”

Tyson later said a chain is only as strong as its weakest link, inferring that McDowell is the weakest link to the metaphorical chain of West Virginia counties.

Many McDowell residents believe their problems are not taken seriously enough. They are only known for their problems and not the vibrant and welcoming community that calls the county home, as was noted by two different people who had moved from other areas to McDowell as adults.

McDowell County was once the crown jewel of coal country, with a population of nearly 100,000 residents in 1950. It is estimated today that the county is down to around 17,000, with over 32% of those living below the poverty line.

When asked if the government’s response to the pandemic was sufficient in meeting people’s needs in McDowell County, Tyson said he was unsure how useful it would be in helping people long-term.

“I don’t know anyone who can’t use a few more dollars in their pocket. I don’t really know how much of an impact it will have across a span of time, though,” Tyson said.

Paul Dick is the Area Director of Young Life — a Christian youth organization. Dick is originally from Pittsburgh, but he has lived just outside of Welch for the past four years. When asked if there was a divide between cities like Huntington and Charleston between areas like McDowell County, he said he felt there was even a divide with smaller cities, including Morgantown and Beckley.

“The metros of those places are the places the people of McDowell would like to make it. Imagine 200 kids graduate here every year, and they all go out into the community to find jobs; they won’t. It’s a numbers thing,” Dick said.

When asked about businesses that have closed or struggled due to the pandemic, Dick explained how everything in McDowell County is already essential – schools, the hospital, the prisons, or “death and taxes,” as Dick put it.

The destruction of the coal industry has been a heavy burden for the state. Still, while many communities have tried to evolve and expand on the other industries in their area, McDowell has struggled to keep up.

There is a vicious cycle of a lack of job opportunities that leads to population decline, forcing more businesses to close. This is compounded by poor infrastructure, including poor internet access and an opioid epidemic seen across the nation. The pandemic didn’t shake McDowell like the rest of the world. There is much less to shake.

McDowell has done its fair share in an attempt to evolve, particularly through tourism. ATVs were spotted riding through downtown Welch multiple times throughout the afternoon, all riding through the Hatfield-McCoy trails. These trails are controversial among residents, saying they don’t necessarily  see the economic benefit of having the trails.

“We are trying to move all our eggs from coal to tourism, and I feel even at that McDowell County is forgotten,” Nester said, referring to the state’s promotion of tourism. “It’s obviously not about ‘let’s build up the areas that need built up’… if you’re working on your house, in my head, you fix the places that need to be fixed first.”

Marlee Rowe is a substitute teacher in the county and moved to Welch after graduating from West Virginia University. “This place, we know it’s overlooked, but it has some of the most cultural history I have ever studied. People here are hardworking and humble,” Rowe said.

When asked to describe the people in McDowell County, a phrase that is repeatedly heard is “they would give you the shirt off their back.”

Despite the problems and the stereotypes that accompany the region, the people of McDowell desire to be known in their entirety. Ultimately, those genuinely wishing to understand McDowell County will have to talk to someone from the area to grasp how deep the roots people have to their home and how deeply they care for one another.

These connections are the ones missed by those simply passing through or the media attempting to showcase the people there.