March Madness: the peak of sports 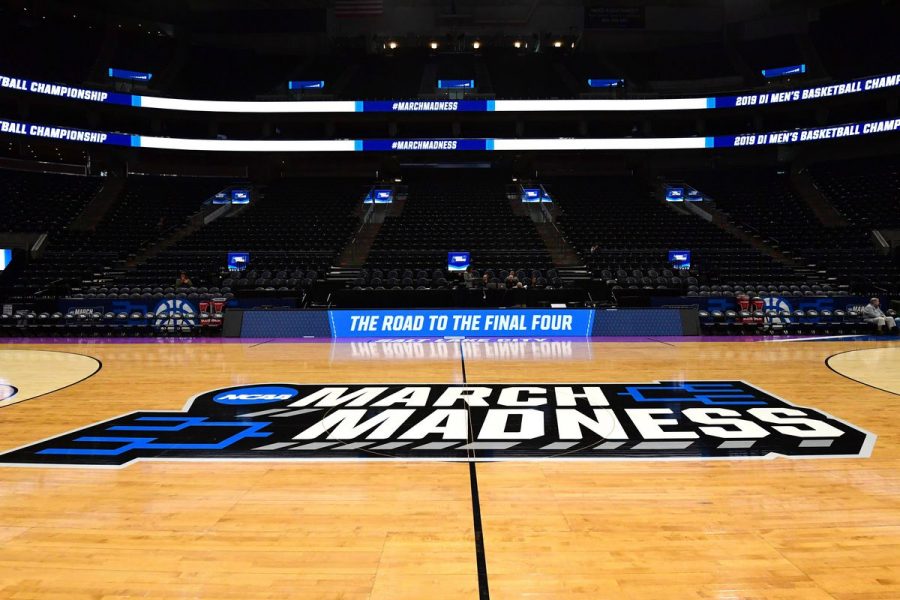 General overall view of the March Madness logo at center court before the first round of the 2019 NCAA Tournament in Salt Lake City, Mar. 20, 2019.

March Madness is back.  Brackets are being printed, filled out and bet on between friends. For many, March is just as synonymous with basketball as December is with Christmas or November with Thanksgiving. Not only is it a widely celebrated and anticipated event every year, but it is also the best sporting event we have in the United States.   Taken from us last year, the first round of the NCAA men’s basketball tournament will return Friday at noon, while the first four (play-in) games will actually tipoff a bit earlier on Thursday at 4 p.m.

Three things make March Madness the best tournament in sports: the enormity, the competition itself and the inspiring storylines. There is only one sports tournament that makes more advertising revenue than March Madness – the NFL Playoffs – and the margin is not by much. For a short time, in 2014, the NCAA tournament overtook the NFL playoffs for the top spot.

March Madness generates over one billion dollars in ad revenue every year, and it is only climbing. That number is greater than the NBA playoff and double the amount made by the MLB playoffs.  As far as media rights, CBS and Turner Broadcasting combine to pay $771 million a year for the right to broadcast all 67 games. The tournament is able to sustain its substantial ad and TV deals because of the viewership it pulls in on a yearly basis. There are an estimated 100 million viewers in 180 countries from the first round to the final four.

In total, the 67 games accumulate 770 million views, which is the most total views any sport pulls in. Obviously, the NFL playoffs still has a better per game average, but the sheer number of opportunities that an advertisement has to be seen by way of March Madness is unparalleled.

So, the enormity of the event is right there with the NFL playoffs, and in some ways, March Madness supersedes it.

Without the enjoyment people find in basketball and the structure of the 68-team tournament, there would never have been the opportunity for the tournament to become the revenue monster that it is today. The unique nature of the tournament, first and foremost, lies in the fact that 68 teams are competing, more than any major tournament in the United States. In fact, there are more teams in the bracket than what the NBA and NFL have combined. With the bracket divided into four segments, there are practically four individual brackets, with the winner earning a berth to the Final Four.

The Final Four itself is one of the unique monikers the tournament has for each round. There is also the Elite Eight and the Sweet Sixteen. Those alliterated terms have become staples in the landscape of sports. There are no other tournaments that have such marketability and branding within each round.

The first round, the Round of 64, is when the actual “madness” begins, and it consists of 32 games. This is the round in which the unmatched distinctiveness of March Madness begins to fully separate itself from its counterparts.

The Round of 64 begins the telling of stories that only the NCAA tournament can procure — the upsets, the deep runs by unsuspecting teams, the noteworthy people around the teams. This round creates legends and stories that last generations. One of the more recent stories, and one the greatest ever seen, is the run by Loyola-Chicago — an 11-seed who made it to the Final Four.

The Ramblers knocked off the No. 6 seed Miami in the first round and followed that up with a round of 32 win against No. 3 seed Tennessee. Already, Loyola-Chicago had cemented its legacy in the NCAA tournament; it was a run that would be remembered. However, it did not end in the Sweet Sixteen as it does for many “Cinderella” teams. The Ramblers continued its historic run, knocking off No. 7 Nevada. In the Elite Eight, with a Final Four berth on the line, Loyola topped No. 9 seed Kansas State, who was on a run of its own.

The Ramblers story ended in the Final Four against Michigan, but that team’s legacy was forever embedded into people’s hearts and minds across the country.

The story, although sufficient with the upset victories, did not end there. The Ramblers had a fan who was with them every step of the way – 98-year-old Sister Jean. Sister Jean, who was born during the Ramblers’ fifth ever season in 1919, had endeared herself with the players and coaches, giving them each a hug as they walked off the court.

Now, 101-years-old, Sister Jean will return to the NCAA tournament with her No. 8 seed Ramblers as they take on No. 9 seed Georgia Tech on Friday at 4 p.m.

What other sports produce true “Cinderella” stories such as Sister Jean and Loyola-Chicago? None. Only March Madness allows a school with a name unbeknownst to many people to rise and take the world by storm. Only March Madness creates the number and quality of indelibly separate memories from the actual game being played.

Villanova won the 2018 national championship, but many people will forget the Wildcats’ championship run as the years pass; some have already forgotten. But those same people will always remember the Loyola-Chicago Ramblers.

That is the legacy of March Madness, and it is what separates it from the rest of the sports tournaments we have. That is why it is the best.

Have a comment on something in The Parthenon? Respond with a letter to the editor at [email protected]