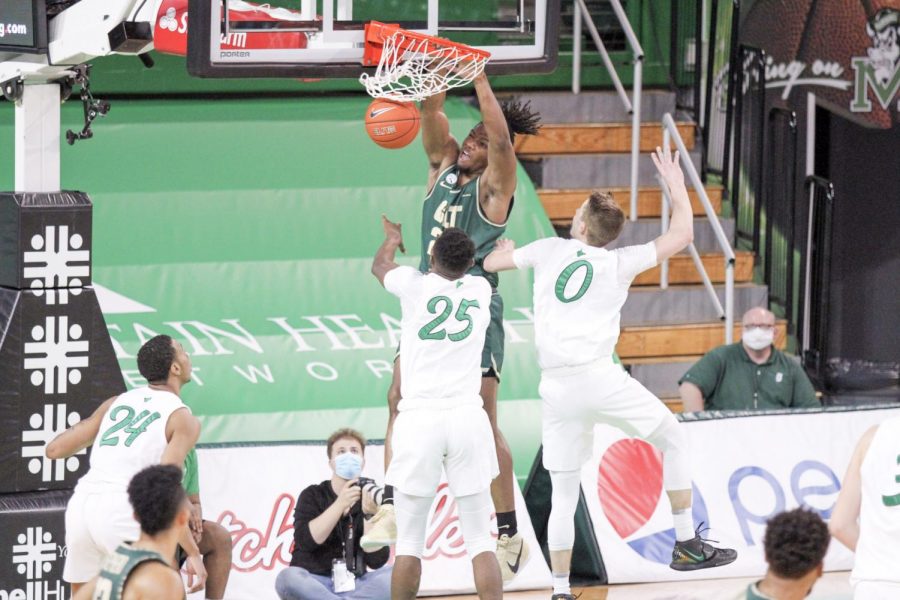 Charlotte's Jared Garcia slams it over freshman forward Obinna Anochili-Killen and next to redshirt freshman guard Andrew Taylor on Saturday, March 6. Charlotte also lost in the first round of the C-USA tournament, falling to UTSA 72-62.

The Marshall men’s basketball season has officially come to an end after losing to Rice in the first round of the Conference USA tournament 72-68 in Frisco, Texas.

Barring a surprising postseason tournament selection, the Herd will finish the season with a record of 15-7 (9-5 in C-USA).

Head coach Dan D’Antoni said that the team did not play up to its normal standards.

“We did not play Marshall basketball,” D’Antoni said. “I thought we did a lot of homerun shooting, a lot of individual things early in the first half.”

Marshall shot 29.4% from three in the game, hitting 10 three-pointers in the game, but four of those 10 threes came in the final 55 seconds when Marshall was attempting a last-minute comeback.

Sophomore forward Max Fiedler put up an efficient stat line, shooting 7-10 from the field while chipping in with 15 points and nine rebounds.

With the victory over Marshall, Rice advances to the quarterfinals of the C-USA tournament to take on the UAB Blazers.