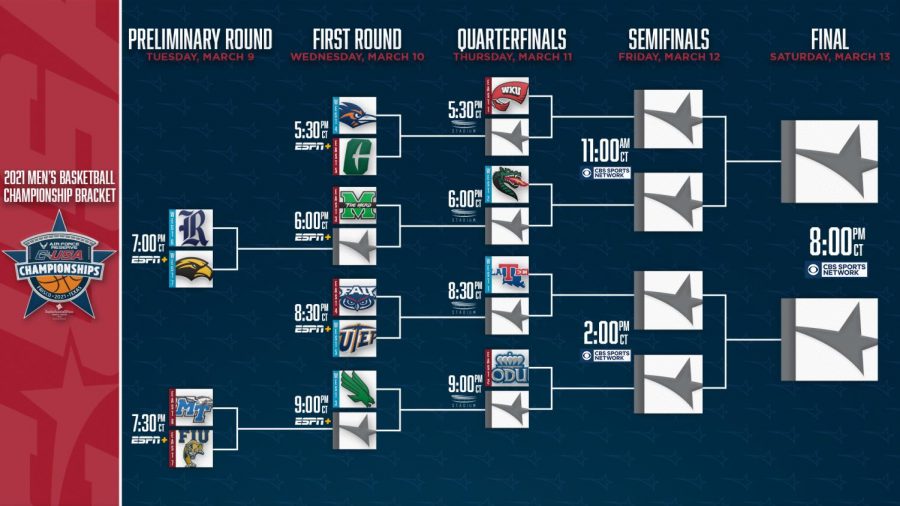 About a year ago, Marshall was preparing to play Louisiana Tech in its second game of the Conference USA tournament, but on that day, March 12, 2020, the sports world shut down – and soon after, the United States would follow.

It was a day for the history books – the day the pandemic became real for many Americans. As things stand a year later, the pandemic is still raging, but the panic has subsided, allowing for sporting events to be played within a system of regulations.

For Marshall, it is practically getting a redo at last year’s C-USA tourney, with 2020’s roster still intact.

The Thundering Herd has made the trip to Frisco, Texas, and awaits its opponent. As the No. 3 seed in the East, Marshall will take on either the No. 7 West seed Golden Eagles or the No. 6 West seed Owls at 7 p.m. Wednesday.

Marshall did not play Southern Miss this season, and although it was scheduled to play Rice, the series was canceled and not rescheduled.

If Marshall advances from the first round, it will play the No. 2 seed out of the West, UAB.

Junior guard Taevion Kinsey is pacing the Marshall offense with 20 points a game, but redshirt sophomore Andrew Taylor is coming on strong for the Herd late into the season, averaging 18.3 points per game and shooting 62% from the three-point line in the last four.

Senior guard Jarrod West is weaning his way back from an ankle injury suffered in game one against North Texas on Friday, Feb. 26.

The Thundering Herd will need all three of its guards playing at a high level in order to achieve the team’s goal of winning the C-USA championship.